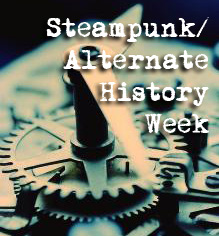 As part of our contribution to Steampunk/Alternate History Celebration Week, I picked out two books in the genre that I hadn't read before, but have been meaning to read—one newly released, one that's been out for a short while; one YA, one not-strictly-YA but more of a crossover. And it's been a fun journey; the two books couldn't have been more different, despite sharing the same overarching genre.

Invisible Things by Jenny Davidson is a sequel/companion book to The Explosionist. It will be a bit difficult for anyone who hasn't read the first book to get their bearings within the ongoing story events, but if alternate history is your thing, then you'll no doubt want to chase down both books. The story presents readers with an alternate pre-World-War-II, one with a very different set of political alliances but some of the same motivations of aggression, greed and desire for control. It's an intriguing setting that blends the developing nuclear technologies of the time period with neo-Victorian spiritualism, and poses a number of interesting what-if questions about the history and the scientific politics of the era. 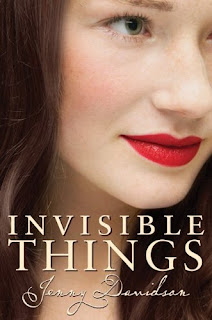 After the events of The Explosionist, the main character, fifteen-year-old Sophie Hunter, is living with the Petersens in Copenhagen, Denmark at the Niels Bohr Institute. Although the momentum in the early chapters is a little slow, the story gains speed when Sophie receives the unexpected and shocking news of the death of her great-aunt Tabitha back in Scotland. And then poor Sophie is bombarded with one shocking revelation after another, finding out secrets about her family that shake her identity to its very foundations and have ramifications for international security. Her role in the ultimate resolution of these thorny situations is a little less active than I'd have liked—I wanted her to show a little more grit and determination rather than everything constantly happening TO her—but the depiction of Sophie's unique world, populated with famous-name physicists and political intrigue, will be hard for alternate-history fans to resist.

Oh, and I absolutely adore her cat, Trismegistus, who evidently demanded an ongoing presence in the book. I, too, have an overfed but muscular cat, but she's not nearly as imposing.

Buy Invisible Things from an independent bookstore near you! 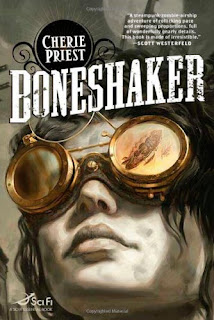 Cherie Priest's Boneshaker is not strictly a YA book, but crosses over very, very well. With both a steampunk-alternate history Seattle setting and a plague of ravening Blight zombies, I'm hard pressed to think how this book could be made more tantalizing. As someone who has very little patience for the zombie genre (for various reasons I won't go into here), Priest's convincing explanation for their origin and the fact that they're more a part of the atmosphere or context or circumstances rather than a major part of the story makes them not only tolerable but enjoyable. They create action and suspense by which the main characters—Briar Wilkes and her teenage son Zeke—test and prove their mettle.

And, trust me, there's a lot of mettle-testing to be had in this world. While the States further east are struggling with the depredations of the Civil War, the Pacific Northwest is suffering the aftermath of a horrific incident: a runaway ice-drilling machine that ravaged the center of Seattle. Inventor Leviticus Blue invented the Boneshaker to drill for gold in the frozen Klondike, but when his invention ran amok, it destroyed the city center and released a zombie-producing Blight gas from underground. Years later, Blue's widow, Briar, has been trying to raise and support her son outside the walls of the poisoned city center. But Zeke gets it into his head to try to find out more about who he is and who his father was—and to do that, he starts on a mad journey back into the city center to Leviticus and Briar's old house. Briar wrangles a spot on an illicit pirate airship in order to go after him, and it's nonstop adventure and action from then on; from the very beginning, actually.

Boneshaker has it all—a fully realized, detailed setting; a consistent tone (with only a few tiny anachronisms here and there) that's established down to the tiny details of language; well fleshed-out and relatable main characters; and a rip-roaring good story that's just plain fun. Priest's alternate Seattle is populated with sympathetic side characters, a scary Dr.-Mengele-like villain, and, of course, wandering hordes of the living dead. What more could you want?

Buy Boneshaker from an independent bookstore near you!
Posted by Sarah Stevenson at 8:00 AM
Labels: Adventure, AF, Fantasy/Sci-Fi, Historical Fiction, Reviews, Steampunk