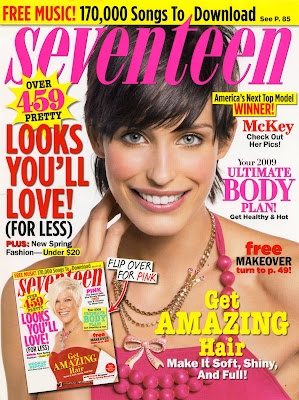 This makes me so happy: The Seventeen Magazine Project -- a wise eighteen year old girl's attempt to live by the tenants of that questionably realistic mag, for thirty days. I love the audaciousness of the project, but even more, I love her Flickr project, which is a fill-in-the-blanks photo essay, which states, "Hey, Mainstream Media! I am..."

The blanks are filled in some amazing ways -- with pictures of girls - and guys - holding up mostly hand-lettered signs that creatively defy the mainstream media's teen stereotyping. My favorite of this second is "Not defined by my genitalia." That, for today, says it all.

(Of course, there's also the "Hey, Mainstream Media! I am... unable to walk in heels," a statement which also speaks to me (people who saw me at the Newbery/Caldecott dinner know this for sure). And the "Hey, Mainstream Media! I am...never going to trust you again," response which also works well for my mood. Just -- check it out, please. And check out the very intelligent, thoughtful Jamie Keiles of Pennsylvania. And think of her and others like her when you're considering a.) the future fate of the nation and b.) writing for young adults.) {Hat tip to Sociological Images.}

So, remember The Bechdel Test, and how many YA writers were suddenly struck by the idea that their work was NOT up to snuff in terms of female characters having something other in their lives but conversations about guys? Sure - plenty of female characters in YA lit. But, do they talk to each other about anything but boys? Now it's time to take on SFF movies. There is much fail. (I'd be interested in someone doing this for kid movies. The only recent movies I can think of which doesn't fail this test is Diary of a Wimpy Kid, and Beezus and Ramona, neither of which I have seen. Surely there must be more.)
Posted by tanita✿davis at 2:20 AM
Labels: Random Notes and Errata, Web Wanderings

i think one of the reasons there is much fail in the SSF movie world is that, traditionally, there is a world to be saved as the central plot, and we all know that it's men who save the world. what is it hemingway said? that in order to be a man you must fight a bull, father a child, save the universe...

movies are a special problem because few people discuss POV. your movie has a main character, the film follows that character throughout, you can generally only be shown what that character sees or knows. even if they know several women it is rare (for storytelling purposes) for them to be together, with the male protagonist, talking to each other. it's just not their story.

also, when it comes to action, in order to make female characters equal to male characters they tend to be portrayed as competitive with all, men and women, which makes it hard for them to be friends or allies.

mind, i don't disagree with the bechdel test for examining weaknesses in storytelling equity, but i think the problem goes deep into the heart of narrative expectations and structures and most media aren't willing to rock that boat.

btw, i saw SALT over the weekend and throughout i kept thinking "thank you for turning down the lead, tom cruise" because angelina was such a better person for that role. now, we can look at that as an example of "blind" casting in that the lead was assigned regardless of gender (and probably a little bit of marquee recognition) but then we have a film where she's the only women in a man's world of espionage. if cruise had starred in it, the film would be void of any women. should we be seeing that as a shift toward the better?

Now that you bring it up, an awful lot of SFF movies, even if they do have a strong female lead, do the "woman in a man's world" thing. I think part of it is that we're still stuck in a nostalgic aesthetic when it comes to the structure and the story of sci-fi especially--either because we're still making movies based on older literature or because we're making movies that harken back to that earlier aesthetic. The Heinleins, the Harlan Ellisons, the Philip K. Dicks of the world wrote some fascinating stories but, as in society at the time, women don't always get a central role.

They need to start making some movies out of Connie Willis books.

I can't really address YA movies...the last one I saw was Percy Jackson, which is a double fail with respect to this particular discussion--SFF and YA, and hardly a girl in sight. The one female YA character started off intriguingly strong and then totally petered out and got lame.

LOVE that HEY MAINSTREAM MEDIA thing. I looked at all of the photos, in fact. SO GREAT!

I am thinking about going through all the sff Newbery winners, now I have them in their nice little list for my poll, and applying The Test to them...and then I am wondering if I will find the time to do so....tricky, since I don't have them all to hand.

Charlotte, that's a huge project... but it might be quite worthwhile.

I wonder if we'd find the ones back when the Newbery STARTED were better equipped to pass The Test than the books now... although the Old-Skool SFF had so few women in them that they wouldn't.