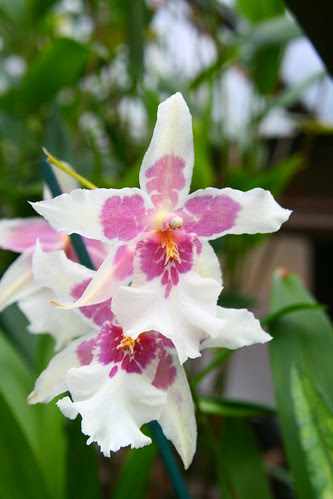 Got up, got dressed, and zipped up my blue cardigan sweater. Why? 'Cause
Mr. McFeely said to... I'm wearing my favorite sweater in honor of what would have been Fred Rogers' 80th birthday. I'm also wearing it because it's cold and it's raining, and Mr. Rogers pretty much advocated the wisdom of coming in out of the rain, yes?

Still, it's the first day of Spring. The Earth is tilted, the north and south poles are equally distant from the sun, so we will have almost exactly the same amount of daytime as nighttime. Soon. Never mind what the weather is doing, the end is nigh.

Match It for Pratchett is going strong. Fans of the author's work from around the world are matching funds to make his million dollar (or, £500K) gift to Alzheimer's research doubled. This is a good cause indeed.

People either love or loathe The Famous Five, and if you're in the UK I think you have to love them. It's probably in the contract. Now they're being updated -- actually, they're being given the Disney Animation Treatment. No more ginger beer, lashings of it or otherwise. Instead it's iPods, laptops and a multicultural cast. However, some people think well enough should be left well alone.

Speaking of series -- The Dangerous Book for Boys is ...soon to become a television show. Channel Five is sending celebrities and their sons on... "adventures" and it's meant to be "riveting TV." Hm.

The forecast this weekend calls for snow on Sunday, and as I write this, winds are gusting between 24 and 45 mph...

Maybe I should just wish you a Happy Spring and leave it at that.
Posted by tanita✿davis at 3:10 AM
Labels: Random Notes and Errata, Views

Hang in there. It will be soon!!