"I plunged into this thing lightly enough, partly because you were too persuasive, and mostly, I honestly think, because that scurrilous Gordon Hallock laughed so uproariously at the idea of my being able to manage an asylum. Between you all you hypnotized me. And then of course, after I began reading up on the subject and visiting all those seventeen institutions, I got excited over orphans, and wanted to put my own ideas into practice. But now I'm aghast at finding myself here; it's such a stupendous undertaking. The future health and happiness of a hundred human beings lie in my hands, to say nothing of their three or four hundred children and thousand grandchildren. The thing's geometrically progressive. It's awful. Who am I to undertake this job? Look, oh, look for another superintendent!"

Since paying a visit to the Museum of Childhood, I've been itching to get my hands on some of those lovely old books for girls. I went to my own bookshelf and pulled out my first edition (!!! Two dollars from a used book store!!!) of Jean Webster's Dear Enemy.

Jean Webster, born Alice Jane Chandler Webster, was a publishing kid; her father, Charles, worked for her mother's uncle, Samuel Clemens. Jean knew all about the pressures of writing, the autocratic process of dealing with editors -- and very temperamental writers -- and much of what she observed was reflected later in her amusing sketches of bossy, patriarchal men. Jean Webster's fiction is described as being subversive; early 20th century women were still thought of as rather...empty-headed, in that kindly, overbearing Victorian sense, and in need of guidance by men. All of Jean's female characters went on to become educated (Webster herself was a Vassar graduate), and whether they were from poor orphanage backgrounds or wealthy socialites, they learned the value of hard work, and went out and "made something" of themselves, for the sake of others.

Far from being sort of grinding morality tales, Websters work is -- delightfully funny. The dialogue is arguably the basis for a lot of American movies that were filmed in the forties and fifties -- playful, combative men and women who eventually fall in love -- as equals. 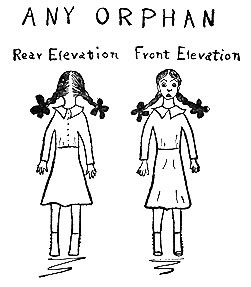 After Vassar, Webster traveled and wrote and worked as a journalist, so it's hard to figure out where she found time to fit her writing, but she did.I very much wish that I could get my hands on Jean Webster's earlier works; though only two of them survive in print (and I found her first one on Project Gutenberg- Yaaay!), Webster was prolific, publishing six others as well as Daddy Long-Legs, New York: Century, 1912, which Jean illustrated herself, and which was made into the famous Leslie Caron and Fred Astaire vehicle. Dear Enemy New York: Century, 1915, also survives.

Dear Enemy is a companion novel to Daddy Long-Legs and tells of Judy (Jerusha) Abbot's roommate, a girl named Sallie McBride who was born to money, but whose education in economics and social work -- and her wily roommate -- has challenged her to take up orphanage reform. Short of experiences, time and battling up-hill against the "we've-always-done-it-like-this" Victorian bureaucracy, Sallie is trying to allow the kids to be individuals instead of faceless wards, and trying to bring life and color into the lives of the kids at the John Grier Home. Her nemesis is a Scottish doctor, Dr. Robin MacRae, whose grim view of her frivolous expenditures and fevered ideas about what it takes to raise a child cause continuous clashes. As the orphanage superintendent (a job I wanted myself as a teen), she must deal with him daily, and so writes him letters addressed to 'Dear Enemy.' She writes hilarious letters of complain to her roommate, Judy, and Judy's husband, Jervis. Sure she's in the wrong place, she does her level best to make a difference in the lives of her charges anyway -- and she truly does. 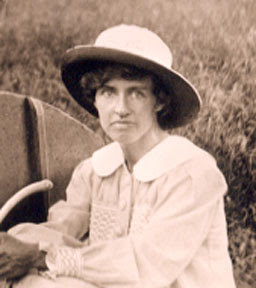 It's a love story, a comedy, and a social commentary all at once. It is also, sadly, Jean Webster's last book. She died, at the height of her career, in the moment of what should have been only happiness -- the morning after the birth of her daughter, apparently of childbirth fever. Dear Enemy deals with simple and practical solutions to life in institutions, and things like hand-washing and cleanliness and order are discussed thoroughly. The irony of Jean Webster dying from a disease brought on by an unsterilized obstetric room and dirty hands is simply painful.

This is a WICKED cool book, and what those post-Victorian age women did to drag poor children and women out of the margins is also wicked cool. Funny, sassy, intelligent (though with some interesting ideas; Sallie McBride was pro sterilization for the mentally unstable -- but this book was written right in the midst of the eugenics movement -- think Love Curse of the Rumbaughs -- eek!), this novel is perfect curl-up-and-smile reading for a snowy day (which we're having here). The epistolary format and the line drawings are charming, and might just make you wish you had three hundred orphans of your own over which to worry.

Dear Jean: you SO rocked.

Wicked Coolth began with Chasing Ray, and will be rounded-up there, too. Check out her post on Incognegro.
Posted by tanita✿davis at 1:46 AM
Labels: Reviews, Wicked Cool Overlooked Books

Didn't know that she was related/connected to Mr. Clemens. I love both of these books.

I adored both these books; and loved the way they are companion books.

I also love this type of historical fiction; fiction that becomes historical because of the passage of time. I love this look into how people thought and lived, and what was the current "up to date" knowledge. As you point out, Sallie was pro sterilization; and no doubt Webster was reflecting the best possible up to date knowledge of beliefs of the time.

My favorite example of this different worldview (which I googled to find exactly, but remember it from my first reading): "Five other children have been sent to their proper
institutions. One of them is deaf, one an epileptic, and the
other three approaching idiocy. None of them ought ever to have
been accepted here. This as an educational institution, and we
can't waste our valuable plant in caring for defectives"

Would it get thru a book written today set in that time period? No, not without Our Brave Hero befriending the "defective" and proving to Sallie that the person is not defective. Yet this is the true way of how people were seen then; and this explains so much about other things that happened and the struggles of communities, such as the Deaf community.

Anyway. I point this out to say, again, this is why I adore books written long ago; the truth of their worldview, warts and all, without apology, which I find helpful, insightful, and not to be condemned but rather helps us understand history. And makes us think, "what today do we think of is UpToDate that tomorrow will make us cringe?"

So sad to hear about her early death.

I'm always so amazed at these gems you find, and floored at the insightful stuff you have to say about them! Great post.

I was so thrilled when Penguin Classics came out with both books in one volume a few years ago. My copy had disappeared when I lent it to a friend, and I was stuck rereading the books on my computer.

But I reread them. And reread them. And even printed out condensed versions for when I was traveling without my computer. (Okay, so I did this with a lot of things. And it's not like I didn't have other books with me. But still...)

Penguin, you did a great thing releasing that new edition.

Both Daddy Long Legs and Dear Enemy are on my list of books I'd love to read (and review) this year. :) I've heard such great things about both.

"Curl-up-and-smile reading." Yup, that's what this post is, too. The whole premise of Dear Enemy makes me wish there was an old-fashioned TV show based on it. :)

Thanks for the great writeup.

Liz: YES, I remember that part!!!!! I was SO gobsmacked by this opinion when first reading these books as a teen. Having just read all about how the Tuskegee Syphilis Experiment, which took place during 1932 and 1972, I was SO disappointed that my heroine was that bad, too. But then I understood that scientific inquiry didn't get anywhere for a long, long, long time without plenty of mistakes. And, like you, I am learning to value the record of these missteps and wrong ideas.