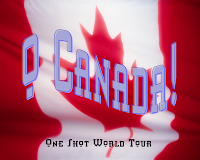 Welcome to one of our two installments for One Shot World Tour: Canada. TadMack and I were both pretty excited about Canada Day, since we’ve been reading some pretty killer Canadian authors lately, and since we’ve both had some memorable trips up to the higher latitudes.

In honor of One Shot World Tour: Canada, I thought I’d tip my hat to one familiar writer and one relatively unfamiliar one from our neighbors to the north. Firstly, the familiar: I’ve been a fan of Ottawa-based author Charles De Lint’s writing since I was in high school, even though the books I read weren’t strictly YA. At the time I devoured as much urban fantasy I could find, though it wasn’t as plentiful back in the early '90s; and Charles De Lint was a natural match, with his fictional city of Newford and its motley population of artists, intellectuals, vagabonds, as well as assorted mythical and mystical creatures inhabiting parks, streets, abandoned buildings...

Newford is a place where imagination comes alive in a fantastical blend of Western European and Native American mythologies. I’m not sure which book was my first introduction to De Lint—it was either Moonheart, The Little Country, or Jack the Giant-Killer—but I was captivated by the vividness of Newford as a setting and the spunky, brave, sensitive, creative heroines that usually narrate De Lint’s novels and short stories.

The past few years, he’s begun writing books specifically for a YA audience—The Blue Girl, Little (Grrl) Lost, and the newly-released Dingo.

Though so far my preference remains with the books he wrote for an adult audience, I’m glad that he’s reaching out to younger readers, and I also think that his YA books might be good for reluctant readers as well—eventually drawing them into his delicious and dark world of urban fantasy. To read more about this multitalented man and find a full booklist, visit his website.

This is sort of embarrassing, but back in 2004, I actually made a writing-related pilgrimage to one of the favorite hangouts of Charles De Lint and his wife--an Ottawa pub that happened to be quite close to where I was staying to attend a conference. I figured, since I was in the neighborhood, I’d just stop by, have a pint, and soak up the good writerly vibes. Unfortunately, he was out of town at the time, but I still checked it out, stayed for a spell, and wrote notes for my own novel. It really just made me wish I had a nearby pub I could sit in to write and peoplewatch... 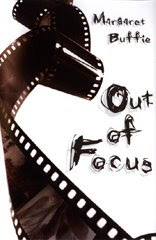 Another Canadian author who primarily writes fantasy and supernatural fiction is Margaret Buffie, originally an artist, who began writing in the mid-1980s. Though she’s known for writing many ghost stories as well as an unusual and creative fantasy trilogy, the first book I encountered of hers was Out of Focus, a novel of realistic fiction and dramatic family tension that I reviewed for The Edge of the Forest. It seems to reprise some of the tense family situations that characterize her first novel, The Haunting of Frances Rain (published in Canada as Who Is Frances Rain?), which was also a ghost story. 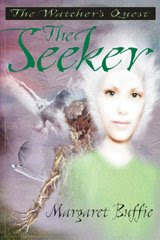 Her fantasy trilogy, The Watcher’s Quest (The Watcher, The Seeker, and The Finder) are quite different—fast-paced, original fantasy in which Buffie creates an entire set of worlds interlaced with threads of Celtic myth. The trilogy tells the story of Emma Sweeney, who, at sixteen, has long known that she’s not quite like anyone in her family. She’s also felt a near-compulsion to watch out for her sickly sister and somewhat flighty parents. Now, as her artist father builds a sort of modern henge out in the fields of their bee farm, she senses a gathering danger and doesn’t know why. When odd new neighbors the Maxims move to a nearby farm, she takes a summer job caring for the elderly father and realizes they aren’t who they seem—or what they seem. I’m always interested in novels about parallel worlds, and I haven’t read anything quite like this trilogy, populated with a fascinating cast of characters ranging from selkies and mer-people to leaf-creatures and walking, creaking mechanical men. A very creative and very visual tale. To find out more, visit Margaret Buffie’s website. 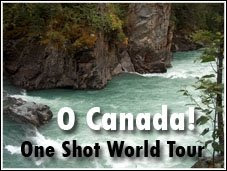 For more Canadian writing fabulosity, check out the full list of participants at Chasing Ray.
Posted by Sarah Stevenson at 7:00 AM
Labels: AF, One Shot World Tour, Reviews

I *love* the covers for Margaret Buffie's stuff, and the Ivory & Horn cover, too. Gorgeous fantasy!

Oooooh! I loved The Watcher's Quest series but had forgotten about it. Thanks for the reminder!

Hey, there's nothing embarrassing about literary pilgrimages. And thanks for the info on Margaret Buffie - I hadn't heard of her, but she sounds like someone I'd dig.