Via the Guardian blog, comes news of news that Random House has jumped onto the YouWriteOn.com bandwagon, and will "read and consider highly rated Top Ten Chart stories on YouWriteOn from April to September in 2008." The site began in 2006 with the idea of helping new writers develop their talents; the site’s affiliated literary agents include Curtis Brown and The Christopher Little Literary Agency agent of J.K Rowling, of course.

While this development is met with quite a lot of writerly hysteria from some quarters, the more cynical among us wonder if this is just for show. We've read just this week at Galleycat about real writers being rejected by fake editors. It's hard to suddenly believe in a kinder, gentler publishing world... but maybe...

This weeks SF Chronicle has some great YA kid reviews, including two books I'm dying to read: How I Saved My Father's Life (And Ruined Everything Else) and Lesley M. M. Blume's Tennyson, as well as a slew of nonfiction, which is good to see. (There really seems to be more nonfiction ...visible this year already. Hurray for that!) My favorite things are the book blurbs, though. Yay for kids responding to literature!

"We didn't buy any Anne dolls or cookbooks, nor did we visit the "Green Gables" facsimile farmhouse, which - judging from online accounts of it - is as complete as Sherlock Holmes's digs on Baker Street, containing everything from the slate Anne broke over Gilbert Blythe's head to her wardrobe of puffed-sleeve dresses to the brooch she was accused, wrongly, of losing. There's even a pretend Matthew who gives you drives around the property, though he's not described as running to hide out in the barn at the approach of lady visitors, as the real Matthew would have done."

Another awesome Canadian author, Margaret Atwood gives Anne-with-an-e a send up in the Guardian. The 'Annery' as she calls the hoopla for the 100th year anniversary, is indeed well in hand. I've lost my ancient copy of my Anne somewhere (my copy was from the 50's and is probably in my parent's house, camouflaged among all the others from that era) but I'm quite tempted to see if I can't find another thrift story copy somewhere and reread it. (Hmm. Another Big Read idea. Sorry, Leila. Maybe I could join you on one you're DOING instead of continually suggesting them? I'm getting there!) 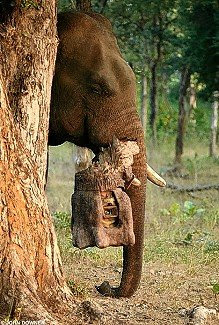 And finally, in the CUTE OVERLOAD category from Mangesh at mental_bloss, an article about an elephant who... went to film school. BBC1 will be broadcasting the amazing, stupendous and awesome footage pretty soon. (I love mental_floss's blog, can you tell? Where else do you find out that it was Grace Slick singing to you all those times on Sesame Street!?)
Posted by tanita✿davis at 7:02 AM
Labels: Random Notes and Errata, Views, Web Wanderings

Hey! I'm dropping by to say hello. I'm thinking it's about time to reread Anne of Green Gables. I never cared overly much for the sequels, and I think that's because I like reading about Anne as a child.

Alkelda, if I re-read, I'll let you know... It really is a book worth looking at again, because I realize it had a major impact on me -- and now I wonder why!