As one who has read many of the Potter books in ebook form (AFTER having read them at least once each in their tome-esque glory, please note), I was mildly surprised that the latest release from The Rowling Empire, Harry Potter and the Deathly Hallows will not be released in ebook form. And then I read the rest of the article, and realized every ebook copy I've read has been... illegally pirated!? Oh. Wow. And to think I've felt quite righteous in only buying the books from independent booksellers. Ouch.

A fun factoid from the UK Guardian is a look at the various languages the Potter books come in -- sometimes, due to familiarity and language issues, Professor Snape becomes Professor Sneep... but never mind, you'd recognize his sneer in any language.

You've no doubt heard of The Class of 2k7, a group of first-time children's and YA authors with debut books coming out in 2007 who hope to promote each other's books with a joint website, blog, newsletter, forum, chat room, and brochure. While it's a great idea, it begs the question (at least to me) of what people do when this year's "class" graduates. Are there plans for a Class of '08, or is the newness of the idea played out?

I had a chuckle last week, having just read a note from Ursula LeGuin on how smart writers ought not depend on the connections of other writers they meet to promote them (a VAST paraphrase, read the whole piece here), A few weeks ago, one of my Cybils Sisters met Justina Chen Headley for the first time, and she briefly lost the power of coherent speech, and grinned a lot. Now, I ask you, WHO are the people who, when meeting an author, decide that they simply must shove their manuscript into their hands? Who has that kind of ...nerve?! It still galls me that I ghosted around a Conference where two of my favorite authors were speaking and I could not do so much as meet their eyes. I guess I'd definitely rather be ridiculously awe-struck than ridiculously forward, though.

I have neither seen the Bollywood version of Pride & Prejudice nor seen the latest installment of it which starred Keira Knightly (I'm a BBC/Colin Firth fan, thank you very much), but I have, of course, read the ORIGINAL, and also read Enthusiasm, so I well knew that 2006 was very much the Year of Our Jane. Now, I find I was early with that idea -- THIS year is ostensibly 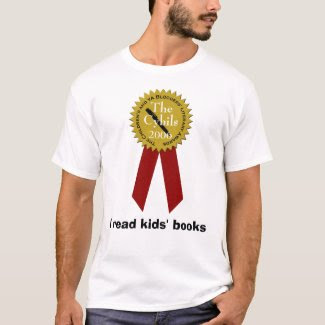 being dedicated to all things Austen. Methinks 2007 is the year of Jane Austen OVERKILL -- as publishers and filmmakers rush to reshape her work for teen audiences. And here we'd thought Jane had already done that herself! And may I just share Bookslut contributer Jessica Crispin's ire regarding the UK Telegraph's use of the word 'spinster' in regards to Ms. Austen!? Sigh...

Well, we book purists have either swooned or shuddered over the impending Pan Scarlet sequel currently being penned by Geraldine McCaughrean -- latest details on the the newest Neverland tale, here.

I've just got new running/walking/theoretically-moving-quickly shoes. Don't you think this great tee would go well with them? You can purchase this fab shirt at AnneBLevy's Gallery at Zazzle in any of 250 lovely styles and colors, as a tee, a hoodie, or a tank. You know you want one: it'll pair nicely with your ratty Sunday shorts and the ALA bracelet about banned books. Support your reading habit!
Posted by tanita✿davis at 10:50 AM
Labels: Book News, Views

Oh, you've caught me. I'm one who's dug around for those Potter e-books, and didn't really care where they came from. I would have paid, if only the publisher had made them available. But, no, they're like many children's publishers, and they don't make an e-book available to anybody.

It's one thing to buy the tome because you love it, another to wait for the thing to show up in the library. It's still another thing to have to haul the idiotically huge book (hello, editor? edit the woman, please) all over the place, at which point pirated e-books become a really nice option, unfortunately.

Thanks, Erin--I was wondering that about 2k7/2k8 myself. Not that I have anything upcoming!! Sigh.

Anyway, I wanted to say that

A) Bride and Prejudice is very ...interesting. A bit oddball; less so if you're familiar with Bollywood movies. But cute. Don't expect it to be like Chadha's other movies. And it's enough unlike the original to be something entirely its own.

B) I myself own one of the random-language Potter books--Harri Potter a Maen yr Athronydd (Welsh, of course), though I have yet to finish it. It's a little difficult to deal with the subtleties of made-up words in another language...

C) Speaking of Harry Potter, I saw this in the Datebook a few days ago: 'Harry Potter' Stage Strip Stirs Storm

DEFINITELY thanks, Erin - I looked at the site and couldn't find anything in particular.

I had a good giggle over the Naked Harry Potter thing. Have those parents flipped? He's NOT HARRY POTTER. Harry Potter is FICTIONAL. The other bloke? He's an ACTOR. They do that kind of nude thing.