Lucky Trimble... isn't. Her mother died two years ago when she was eight, the morning after a huge desert storm, and so she's now being taken care of by her father's first wife, Bridget, from France, who might at any moment go home to her mother, who, in Lucky's opinion, is set on luring her back with gifts of mustard and homesickness. Bridget is a first class lady: cultured, smart, funny. What on earth would make her stay in the weird little town of Hard Pan that Lucky's called home since forever? Bridget is used to good restaurants, wine, cheese and Paris. Hard Pan has 43 residents, and only three paying jobs, one of which Lucky has. 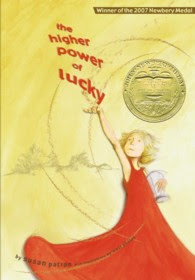 Lucky knows her time with Bridget as her guardian is limited. She's been eavesdropping through a hole in the fence during the Anonymous meetings, hoping to find out how to find her Higher Power like her friend and former alcoholic Short Sammy, but she's not finding out how fast enough. She's going to have to do something - quick -- because she's seen Bridget's passport and her suitcases. Once Bridget is gone, Lucky knows she'll be put into foster care, and she won't be able to keep her dog, or her independence. The best thing to do is strike first by running away from Bridget. But there are complications, including a dust storm... who knew running away would be quite so ...complicated?

A quietly tender, sometimes sad, sometimes funny book, The Higher Power of Lucky is not necessarily an easy read, but is worth the effort -- buckle down your attention span and hang in there! It is also the recipient of the 2006 Newbery Medal, and word is a sequel is on the way.
Posted by tanita✿davis at 1:42 PM
Labels: Girls Fiction, Middle Grade, Realistic Fiction, Reviews