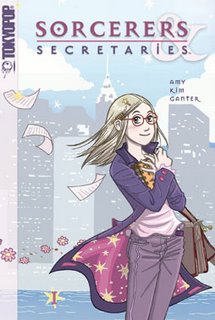 Nicole Hayes is a young college student who works evenings as a beleaguered receptionist for a design firm. But she also has a secret life—in the pages of her notebook, where she writes and draws the story of a lonely sorcerer, betrayed by his only friend, a familiar who was a vengeful demon in disguise.

Nicole's rich fantasy life helps alleviate the boredom of her day-to-day existence, but underneath it all she's still lonely. It's difficult to let anyone in, though, when she's afraid to reveal her fantasy creations, her true self. Her friend Susan, who also works at the design firm, thinks fairy tales are for children. If that's how people think of fantasy, how can Nicole ever find someone who takes her seriously?

She might not have far to look—her former neighbor Josh Kim, who works in a local bookstore, is smitten with her. She's the only girl who's ever presented a challenge to him. Every other girl who crosses his path practically throws herself at him, while Nicole…is mysterious. Even when they were neighbors, she'd been difficult to get to know. If only she'd give him a chance, if only she knew what a secret romantic he was…

This is the first book in a cute, funny, manga-style two-volume set--Sorcerers and Secretaries by Amy Kim Ganter. The characters are sweet and the parallel story of Nicole's fantasy world is a nice counterpoint to the real-life action. Some of the stylistic conventions might be perplexing to those less familiar with manga, such as the use of chibis, or simplified, childlike versions of a character that are used for humorous or expressive purposes. The artwork is endearing and expressive, though a bit "cartoony" as opposed to realistic. It's an entertaining and quick read to add to the growing collection of graphic work that appeals to female readers.
Posted by Sarah Stevenson at 1:02 PM
Labels: AF, Reviews