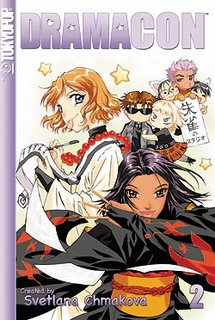 I have to admit—I didn't think there was any way that a manga about a manga convention could possibly be good. It sounded like way too high a dose of geekiness for me. That'll teach me to judge a book by A) its cover, and B) the blurb on the back. I really enjoyed Svetlana Chmakova's Dramacon Vol. 2, which turned out to be much more than a story about a manga convention. It's a story about friendship, love, growing up, and pursuing your dreams.

It is, though, a story set in the world of comics and manga. If it were only about those topics, it would be far less likely to gain readers outside of the otaku set, and frankly, the cover blurb seems written to appeal to that set of fans. But I was very happy to have my first impressions be proven wrong. I'm far from expert on either comics or manga, but this is a charming, funny, surprisingly deep ongoing tale about two young women who are creating their own comic and promoting it at a big comics and anime convention.

In many ways, this story is about defying certain expectations that dominate the world of comics and manga. The two young women meet their idol, a female comic artist named Lida, who fills them in on the obstacles that face women trying to break into the male-dominated industry. They encounter sexism, racism, and crazed fans who insist that only Japanese can produce "real" manga, and manga produced by and for an English-language audience isn't legit. However, Christie and Bethany are good--really good—and even the most militant of manga fans are able to see that.

Unfortunately, Bethany's not sure she can get her parents to realize that drawing comics is a viable career option, even when a famous manga company offers her a job as an artist. Meanwhile, Christie is preoccupied by Matt, a guy she met at the convention the previous year. He'd been a real friend, with the potential for something more, but this year he shows up with…a girlfriend. This title has a bit of soap opera about it, keeping the reader hooked and eager for the next volume. But above all it's very cute and very funny. It's a great example of the manga style done well: nicely rendered artwork that uses manga conventions effectively but not excessively; that uses subtlety as well as it uses comic exaggeration.

Evidently Dramacon's creator, Chmakova, also does a comic in the back of CosmoGIRL magazine. Her work gives me hope for the increasing popularity of comics for female readers—and for increasing opportunities for female comics writers and artists.
Posted by Sarah Stevenson at 11:02 PM
Labels: AF, Reviews