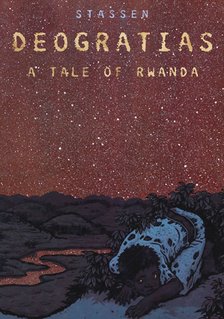 Until I read Art Spiegelman's classic graphic novel Maus, I had no idea of the scope or potential of the comic medium for telling stories of great import, of great pain, of great historical significance. When I did, I realized that graphic novels have a unique capacity to unflinchingly convey difficult realities while somehow also making them both more beautiful and less painful; more cathartic and less harsh. Of course, this is one of the functions of art.

Like Maus, J.P. Stassen's Deogratias: A Tale of Rwanda tells the story of one individual against a violent backdrop of the horrors humankind inflicts on itself—in this case, the aftermath of the Rwandan genocide of the mid-1990s. This is definitely not one for younger YAs or middle-grade readers, but older YA and adult readers will find this an eye-opening, tragic look at how the effects of civil war and constant violence can turn an ordinary teenager into a half-mad half-wild creature whose sense of reality slowly slips further away.

It was a little difficult to follow the timeline of the novel—it slipped between past and present, between the time before Deogratias' life was changed by the genocide and the time after horrific events caused him to turn to drink, to turn inward. The cue given was Deogratias' general state of deshabille, but at times I had had trouble figuring out when something was happening. However, this was my only complaint about a work that should probably be required reading.

For those of us who remember the time of the Rwandan genocide, many of us probably experienced it as a faraway, theoretical occurrence, happening to someone else, somewhere far removed from our own lives. Deogratias brings it to life, gives it a name and a face (in fact, several names and faces). The dark, vivid colors of the expressive artwork appropriately echo the darkness and chaos of this haunting story. A must-read, this will make you wonder what the world was thinking that we allowed this to happen.
Posted by Sarah Stevenson at 10:57 PM
Labels: AF, Reviews