Cybils SpecFic Bookmark: SHE MYSELF AND I by EMMA YOUNG

The Cybils SpecFic Bookmark: As a panelist for Cybils YA Speculative Fiction, Round 1, I'm going to be briefly writing up some of the hundreds of book I read as part of the award. As panelist conclusions are not for public consumption, the purpose of these write-ups is to keep track of what I'm reading, and will mostly touch on plot synopsis, with minimal spoiler-y comments and thematic tropes.

Synopsis: Rosa is young, British, and has had a debilitating nerve disease which has taken her freedom. Quadriplegic and feeling like a burden on her family, she is eager and excited when a controversial "cure" emerges - the chance to swap her brain into the whole and healthy body of a comatose American girl named Sylvia who was also white and young. The family flies to America, and the surgery is done... but Rosa's doubts begin. Is she still... herself? Is she now someone else, too? Is she also carrying Sylvia's soul? Is it fair to go on if Sylvia - whom Rosa is now convinced is a resident somehow in her body - is unhappy? An unhealthy obsession with Sylvia begins, as Rosa researches her, stalks her family, and eventually attempts to insert herself into the life of the girl who is gone. With the help of a journalist with whom she becomes entangled, Rosa escapes from the medical facility where she's meant to be healing, and walks away from her own life to immerse herself in Sylvia's - hurting her own family, and ultimately herself. As she struggles to come to grips with who she is now, and who she's supposed to be, now that she's inhabiting Sylvia's body, Rosa falls in love and finds that the questions she had matter less than living her very best life, and being happy. 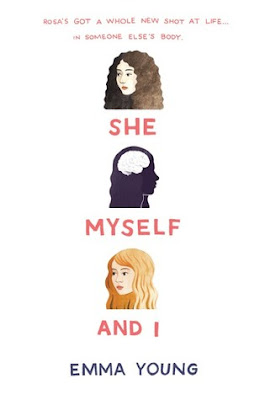 Observations: Speculative fiction has been debating the merits and demerits of brain swaps since the first very amusing black and white science fiction films. It's one of the last Big Questions about consciousness and the soul and the "you-ness" of a person. Rosa feels a lot of guilt after the surgery - guilty for being excited that she's attractive, guilty that she is attractive to others, guilty that she is just who she is, and not someone better or more deserving. She is conflicted and spends a lot of time in her head, coming to various conclusions about whether or not Sylvia is a reluctant rider in their shared body, or if Sylvia should take over and Rose should step back. She had a lot of questions, and I was dissatisfied with the conclusions Rosa came to, because she was derailed by her romance. Rosa watches a movie with a friend about a man who chooses to die rather than live with a disability... and especially since Rosa has lived with a disability, one that had really hit her from the ages of ten to eighteen, that seemed an odd choice, and I expected her to react differently to the film.

The author doesn't give us much information about Rosa's disease or the nature of its progression, or enough backstory to help us understand what what her life was really like, before having her brain swapped. Rosa's disability is framed against her parent's anxieties and her concern with not being a burden to them, but that tells us nothing about how she lived and what she did - which argues that the life of a quadriplegic person is of so little interest that the reader wouldn't have wanted to know anything about it. Which isn't true. This was one of the biggest quibbles I had with the novel.

Conclusion: An interesting and time-honored concept in speculative fiction, the brain swap remains one of the last bits of "undiscovered country" in our physiology. Rosa deals with questions and worries to that many a teen will relate. The idea of turning into a whole new person with a whole new brain, and finding a whole new attractiveness and a lightning fast romance will also resonate with many in an entertaining way - but readers seeking something with a deeper and more realistic look at disability might look to Sharon Draper's OUT OF MY MIND or Chelsie Hill's PUSH GIRL for more.


I received my copy of this book courtesy of the publisher. You can find SHE MYSELF AND I by Emma Young at an online e-tailer, or at a real life, independent bookstore near you!

Posted by tanita✿davis at 9:43 AM
Labels: Fantasy/Sci-Fi, TSD Review