Synopsis: One melancholy feeling day, Hadley Jamison arrives at school to hear that a boy she'd been in Freshman English with has committed suicide. The feeling of melancholy she feels quickly swells to true grief. She hadn't spoken with Asher Morales in years. Really, she only stared at him in Freshman English and blushed a lot... but it seems wrong that he's dead, wrong that someone who had such obvious depths - even if he never spoke to her to share them with her - could have thought his life wasn't worth living. Seeking closure, Hadley lurks at the back of the church where his funeral service is being held. She lingers at his casket, wondering what she could have said to change things. She meets his family, and, on the way home, is accosted by the most terrifying man she's ever seen. Parchment white skin, knife-edged cheekbones, and the most insinuating smile. He takes her to coffee, and she's powerless to escape him. He has a proposition for her - a little job he'd like her to do. If she'll just sign a contract to help out, he'll drop her back twenty-seven days in time. She'll have a chance to save Archer, and right a little wrong in the Universe.

The guy says some vague things about danger and trouble, but Hadley's only hearing that there's a chance to bring Asher back to his family. Her parents are on yet another business trip, and the last person she talks to every night is the doorman. What else does she have to do with the next month, anyway? 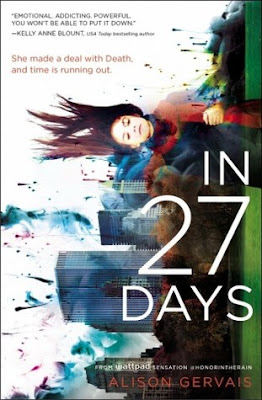 But Asher is not easy. He's rude. He's abrupt. He's closed off and cold. Hadley's doing everything she can to get close to him, but if someone doesn't want you as a friend, you won't be friends. Is it worth it to keep trying? Is it worth caring for someone who doesn't care for you, especially if it looks like it might cost you your life?

Semi-Spoiler-y Observations: Originally published on WattPad, this is a fast-paced, emotionally engaging adventure which leaves the reader little time to do anything but hang onto their hat and be dragged into the narrative. A dominant culture girl with a cast of mostly white friends (Asher is Italian) Hadley is a very regular, ordinary girl who is suddenly thrust into a cosmic tug of war essentially between death and chaos. While she is chosen to take a stand against chaos, I found myself with a tiny question of "Why?" I kind of wished for a little bit of ...mystery or backstory to give her character some depth. Her parents are workaholics with money and impeccable tastes, but how did the Universe know that Hadley was worthy of taking on this huge task? Does this second chance business happen for anyone else?

Most people won't worry with nagging questions like this one, however, and will race into the story. As an adventure, giving a human being the power to fight on the side of life, it is compulsively readable.

Conclusion: For anyone who has wished that they could have a second chance to make things right, this story will be the best of wish-fulfillment catnip. A slow burn romance, a boisterous Italian family, and a chance to tally one up for the side of good vs. evil makes this a light, fun, vacation read.


I received my copy of this book courtesy of the publisher. You can find IN 27 DAYS by Allison Gervais at an online e-tailer, or at a real life, independent bookstore near you!

Posted by tanita✿davis at 6:12 AM
Labels: Adventure, Fantasy/Sci-Fi, TSD Review