Synopsis: Adam just wishes he could sleep. That's what normal people do: see their fathers. Sleep. Go to school. Talk to people they might kind of crush on. Normal would be great, but it's just not in the cards. First, Adam's mother vanished when he was four, and his dad is always gone, and never around when he needs him... except Adam sometimes sees him in his dreams. Adam instead lives with his cranky, paranoid grandfather, who believes everyone is out to get him. Adam's next challenge is that he can see... shadows on people. He knows when they're going to die, and no matter what he does to try and tell them... they die anyway, even if he's changed their path. Finally, speaking of dreams, there's this kind of... monster who basically hugs him to death when he dreams, and then he wakes when his dream-Dad saves him. Lacking sleep and overdosed on coffee, Adam fights monsters in a waking dream at school one day. Unfortunately, he wakes up with everyone believing he's had a nasty psychotic break. In the name of getting him "help," his father enrolls him in a residential school... which isn't for kids with psychiatric problems at all. It's for kids with the power to be soul guides. Adam finds opening to him a world he could never have imagined in his deepest, scariest dreams. He finds a place to belong, which surprises him, and feeds his soul. He also finds out about his mother - who disappeared in mysterious circumstances - and the whys and wherefores of his parents' relationship. He also finds himself going up against a shadowy organization which is bent on destroying him, and maybe his school, too. Adam's going to need to accept a few key things before he can move his story further - and unravel the unknowns between him and his goal of being normal... well, as normal as a guy who can drop into Limbo can be. 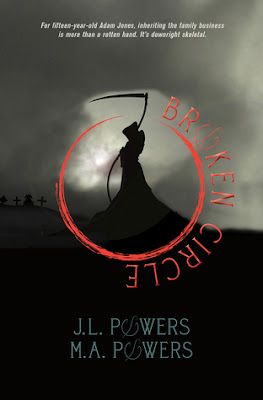 Observations: In many ways this story is familiar - there have been myriad other Secret Identity novels in which the Lost Prince or Boy Who Lived is unaware of a birthright world just on the other side of a bland retaining wall. He twists in the wind in a world where he doesn't belong until, voila, the hidden door opens, the wall vanishes, and the world, with its thousand shades of gray, opens. Nothing is pure good or pure bad anymore, the character stumbles and drifts until he meets a band of plucky outliers, and together they navigate this new plane. There are PLENTY of Potter elements in this book, but it is not about the new-things-per-page lovely whimsy which drive the earliest Potter novels. This book is dark and grim and Adam's existence is both snarkily amusing and realistically painful. While there have been other YA novels riffing on the idea of the Grim Reaper, and while the cover with the elegant scythe on it is a dead giveaway of some of the narrative elements, there is a lot of difference here to be discovered. Readers will rejoice in the brother-and-sister team's worldbuilding, which is rich and detailed, and while the twists in this book are mostly known before the character knows them, the characterization and remix of mythology will keep readers reading. Adam's self-effacing, sarcastic voice will work well for many readers.

Conclusion: Come for the sarcasm and the familiarity, stay for the unknown and the yet undiscovered! While this book wrapped up nicely in an "episode" fashion, there are some unanswered questions which leave room for a sequel - stay tuned.

"The Powerses' worldbuilding and writing will keep [readers] hooked. They will find themselves questioning what is fact and what is fiction and cheering Adam on as he journeys in this new, strange world. A gripping, philosophical paranormal thriller." --Kirkus Reviews


I received my copy of this book courtesy of the publisher. You can find BROKEN CIRCLE by J.L & M.A. POWERS at an online e-tailer, or at a real life, independent bookstore near you!