Synopsis: A quiet kid and longtime recipient of the grade school bullying, even in high school Danny doesn't feel safe without an empty corridor and a wall at her back. Faced with impossible pressures - her own inner identity as a girl and her father's testosterone poisoned insistence that Danny be "the man" her father raised her to be, Danny finds relief - and a little rebellion - with a downtown New Port City nail polish purchase. But a covert pedicure puts Danny in the unenviable position of witnessing a superhero fight - and seeing a white cape go down. Dreadnought has been one of The Good Guys forever, and when Danny sees him crash and burn, her heart is broken... but then her heart is reformed... along with her body. Now Danny-the-boy is good for good. Taking on the mantle of Dreadnought's powers means that Danny has a new power: the power to truly be Danielle. Everything is going to be awesome now, right?

Ri... No. First of all, there's the white capes - Danny is a minor, and can't officially join Legion Pacifica. Second, there's Danny's best friend, a loner like Danny who desperately just wants a chance with a girl - and thinks the new and improved Danielle is now his chance... and that Danny, like, owes him that chance. What? Third, there's Danny's Dad... and his belief that Danny is a disease to be cured. All this plus battling a malicious flying cyborg...? Means Danny's life just got a lot more complicated. 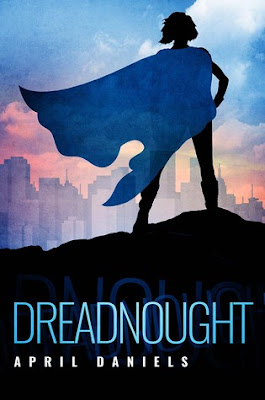 “I see a world that is terrified of me. Terrified of someone who would reject manhood. Terrified of a girl who knows who she is and what she’s capable of. They are small, and they are weak, and they will not hurt me ever again. My name is Danielle Tozer. I am a girl. No one is strong enough to take that from me anymore.”

Reader's Advisory: In looking at this book for accurate representation, the obviously fictional nature of a presto-change-o gender transition can be overlooked in favor of the realities the author puts forth in other areas. The focus Danny's father had on "curing" her seems accurate to the way many people view transgender people, that they have some sort of a mental instability that needs to be fixed. Danny seems to believe that most of her issues stem from her a mismatch of body and brain. However, in the "right" body she discovers that she nevertheless has to experience being female in all its aspects, positive and negative, (and I can attest that it sucks sometimes), that other people's experiences of gender and their understanding of yours can be the single most frustration barricade to happiness, and, finally, that choosing to be yourself in all your authenticity has less to do with your genetics and everything to do with your choices. I feel this book will read well with older teens who are interested in trans issues or who don't know much about them and just want to read an adventure.


I received my copy of this book courtesy of the public library. You can find DREADNOUGHT by April Daniels at an online e-tailer, or at a real life, independent bookstore near you!