Usually A.F. is the one with the graphic novels, but I was given the opportunity for an early peek at this one - thanks, Lee & Low! Lee & Low is coming up with a new vibe in terms of their offerings; this is the first graphic of theirs that I know of, and the another book for older teens that isn't from their Tu Books imprint. This novel is both awful and gorgeous, horrifying and heroic in its execution, and will strike readers in the heart. I appreciate that it's not played for entertainment - this isn't about pain for the drama and entertainment value, but a conversation about the reality of what's going on in our world - and hopefully it will bring those more flexible, intelligent minds of younger readers to lean on the question of what it's going to take to stop this.

Synopsis: I AM ALFONSO JONES opens with anticipation of a joyful event. Fifteen-year-old high school student and bike messenger Alfonso has just learned that his father’s fifteen-year prison term has ended, and with DNA evidence, his name has been cleared. The ensuing celebration promises to be epic, and Alfonso and his crush, Danetta, are in the mall buying Alfonso’s first suit when an off-duty policeman mistakes the hanger Alfonso is holding for a gun. Alfonso dies of multiple gunshot wounds, but his story doesn’t end there. Alfonso’s class has been studying Shakespeare’s play, Hamlet, and to bear witness to how his story evolved, Alfonso too becomes a ghost, one riding the ghostly subway back through time, to revisit the history of his neighborhood, his people, and himself. 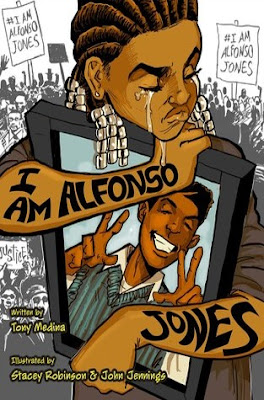 Observations: The tragedy of Hamlet is an appropriate vehicle for the contemporary tragedy of Alfonso Jones. Betrayed by those who should have loved and cared for him, Prince Hamlet’s rage and confusion mirrors that of Alfonso and his classmates. King Hamlet, as Ghost, does not help his son to solve his murder, but bears witness to the inevitable reverberations from his death, and brings up questions for Prince Hamlet to consider. Likewise, Ghost Alfonso, as he bears witness to the others on the Ghost subway, reverberates these question from the other side of the veil: When did black males become public enemy number one? When did children stop being seen as innocent, and become thugs? When did the color of one’s skin become cause for fear, and anticipated violence? When will this war on black lives cease?

This story of love and rage is conveyed with a surreal cast of characters. Alfonso’s story, and the stories of the others on the ghost subway will both grieve and inform, allowing readers to access the language to talk about class and race discrimination, and the very real fact of the propensity for violence by police against people of minority race and class. Despite the grim topic, there are sparks of light in Alfonso’s family relationships, his classmates’ clowning, and the love his community shows him, which will enable readers to consider parallels within their own lives. There is no solution to Alfonso’s murder, no tidy wrap-up of his death in which the rest of his community lives happily ever after, but they do live, as we do – in love and defiance, never forgetting that justice has not been served.

Conclusion: There are always some people who can say, "But he shouldn't have been --" or, "If she hadn't --" to blame the victims, excuse the racist reflexes, and justify the injustice on the part of our nation's police force. This is a painful, yet cathartic read as the author provides new ways to look at the situation, and new ways to keep it before our eyes -- so that we never can not see, and so that we never forget.


I received my copy of this book courtesy of Lee & Low. October 2017 and beyond, you can find I AM ALFONSO JONES by Tony Medina, illustrated by J.E. Jennings & Stacy Robinson at an online e-tailer, or at a real life, independent bookstore near you!