Cybils Speculative Reader: THE KEEPER OF THE MIST, by RACHEL NEUMEIER

We've noticed plenty of "hidden princess" novels this Cybils term, plenty of books about royalty in embroiled kingdoms, waiting for - or fighting for - their kingdom's return. This standalone fresh fairytale is a sideways step away from the typical princess-in-disguise book, and has many elements which will be appealing to a reader in search of an adventure...!

Synopsis: The town's best baker she might have been, still no one in Glassforge has ever forgotten that Kerianna Aileen's mother was once a housemaid in Lord Dorric's household, and had caught herself a baby girl before being cast aside - like the rest of the Lord of Nimmira's women - to make her own way in the world. Keri has been raised on spiky pride and little else, and since her mother passed away, sometimes even pride hasn't been enough to get by. She's learned the trade her mother taught her, and unobtrusively serves the community with cakes and bread and pies - all the while loathing Lord Dorric, the three half-brothers who have been raised in relative security and privilege, and the people who snub her. Then Lord Dorric passes away - and the Timekeeper comes. He tells Keri that the Magic of Nimmira has named her inheritor of her father's skill. She is now the Lady of Nimmara.

It's what she's always dreamed of -- except it isn't. In her dreams, her brothers - who snubbed her - are humbled and respectful, and very, very sorry. In Keri's dreams, the Magic has always chosen the Lord or Lady of Nimmara - and then imbued them with a sense of dignity and nobility. In her dreams, the Magic, which has always been there, remains, keeping the tiny land invisible from its encroaching neighbors. Reality is somewhat worse - one of Keri's brothers is sneering, the other is scowling, and the third is smirking, like it's all a great joke. She's not graceful nor regal, and the magic that protected the little kingdom -- it's gone. Currently, life is a lot more like Keri's nightmares: nothing is right, and she's been left in charge. And all she knows how to do is make... cake.

Fortunately, her best friend, Tassel is on hand, to remind her of who she is, and what she can do. And, Tassel's humorless cousin, Cort, who tells it like it is. It will take all of Keri's allies and all of her wiles to negotiate a truce between all eyes on the crown... and maybe even then, she'll fall short of saving her corner of the world. 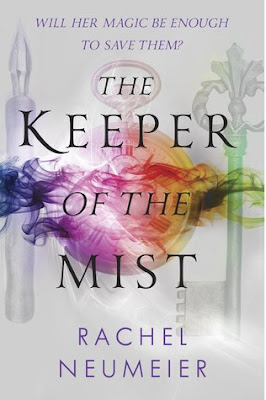 Observations: This book is exactly what's needed to remind people that little roots are what hold up a tree; that from tiny little bits of seed the most massive redwoods grow. We talk a lot about "pluck" and "grit" but rarely does anyone say how to have it... Readers will especially relate to this heroine, because truly, Keri doesn't have anything but her two empty hands. She has to trust in her people, and that she's making the right decisions.

Of course, there are people who don't want to graciously trust Keri to do anything - wasn't she just a baker last week? Keri's half-brothers, as well as other men in this narrative act as they've been trained to - as the only ones with a brain and a will. They try to take over, and speak with Keri's voice. They coerce and persuade and attempt to outright force her to their will. Readers will want to punch someone, repeatedly, during those parts of the book. Just when she gets things nearly figured out and settled, there's another big plot wrench -- which, when readers think about it, they probably saw coming. But, the more important thing is how Keri sets aside her rage before it cripples her, and the fear before it incapacitates her, and goes on. That was great to see.

Though there's a strong female protagonist, this novel will be equally enjoyed by boys and girls - there's fast-paced adventure, as well as plot which requires thought. The lack of romance as an overwhelming emotional tide was a real positive, though attraction exists in the form of a deepening, broadening friendship and mutual respect. While readers might wish for more obvious diversity in terms of gender, ability or ethnicity, most will feel happily sated that this substantial book has a proper beginning, middle, and satisfying conclusion.

Conclusion: Especially right now, novels with themes of Ragtag Band Defeats Incredible Odds By Sticking Together And Combining Their Strengths are incredibly uplifting. If you're looking for a little guidance for how to go on once your kingdom has been exposed to power-hungry predators, -- have I got a book for you!


I received my copy of this book courtesy of the public library. You can find THE KEEPER OF THE MIST by Rachel Neurmier at an online e-tailer, or at a real life, independent bookstore near you!

Posted by tanita✿davis at 6:09 AM
Labels: Chosen family fiction, Class and Identity in YA literature, Fantasy/Sci-Fi

Cool, I picked up one of her other books at Kidlitcon! She was one of the presenting authors.

@Sarah Stevenson: DARN IT!!!!! Why do I always miss authors I want to see?? Admittedly, I didn't KNOW I wanted to see her, but still!!!

Pam is hosting Kidlitcon in Philly.

Rachel was relatively local to Kansas, for a given value of local, and since she's a favorite author of mine I had to invite her....I'm glad you liked this one!