There are elements to this novel which are so familiar -- THE GIVER vs. DIVERGENT vs. OLD MAN'S WAR vs. NEUROMANCER -- we've dealt with the "downloaded human consciousness" trope before. However, the dystopian grotesqueness of seeing it up close, using teens who are already seeking identity and trying to hold onto it -- who struggle with peer pressure and the overarching adult desire for them to conform make this a compelling read regardless.

Synopsis: At ShareHaven, life is shared -- and extended. Jennza knows it's not her lot to be herself forever -- the ultimate use for her is to take on the memories of someone who has passed away, and live again for that family, with those memories. She's meant to take on another life... but she worries. Is her life going to have her good friends Lorelei and Marcus in it? Will it have trips to the seaside, her silly little pet Petal, and her love of climbing? How do you keep all that makes you... you, if you have to grow up to be someone else?

There's not too much time to worry over that, however; Jennza is 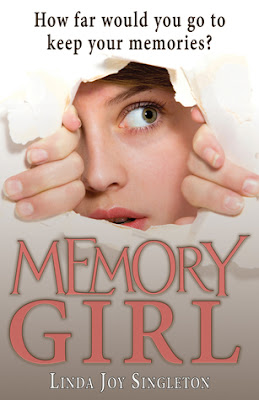 Observations: We don't often, in dystopian novels, get a real sense of "what brought us to this point," and this novel offers only the barest hints of "some big terrible thing happened, and then we decided on this idea." The novel explains more than once that there was no choice but to do this - and the characters don't really react to this as much as the average teen. Though they're conditioned somewhat to accept their place and revel in the idea of exchanging it -- it seems there'd be more than one who rejected this idea.

Religion is pitted against Science in this novel; Scientists are the keepers of wisdom, and belief and faith and even praying are frowned upon as backwards and problematic behaviors in this brave new world. I really wished that the novel had delved further into these ideas, as things like assisted suicide seem compatible with Believers in this world, not Science. Which I found intriguing but a bit odd.

This seems to be a truly post-racial society in some ways - the question of whether someone who didn't look like your long-lost whomever could stand in for them never came up -- which for me was something I was looking forward to exploring. Do people pick their youth based on appearance, or is it only their scores? There is a lot more going on in this society than this book got into.

Conclusion: Though the slang is new, the trope is familiar. A bright, shiny, clean dystopia which walks familiar medical/scientific/we-have-all-the-answers paths, yet prolific Singleton has provided worldbuilding which gives a new depth and provides new ideas to explore for the reader.


I received my copy of this book courtesy of CBAY Books. You can find MEMORY GIRL by Linda Joy Singleton at an online e-tailer, or at a real life, independent bookstore near you!

Posted by tanita✿davis at 6:29 AM
Labels: Dystopian, Fantasy/Sci-Fi, Suspense

Interesting premise. The author lives in our region, sort of--in the foothills, I think. I met her once at a conference because her publisher at the time was the same as mine! :)