Thursday Review: THE ORDER OF ODD-FISH by James Kennedy 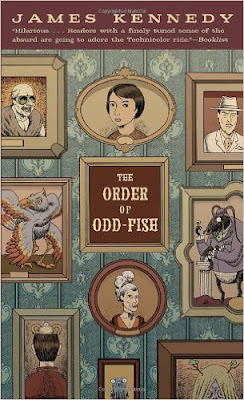 Synopsis: This is another one I acquired and got signed at the KidLitCon in Wichita a couple of months ago—and I got to meet and hang with the author as a fun bonus! Interesting aside—James Kennedy is founder of the really awesome 90-Second Newbery Film Festival, which brings students, teachers, and librarians together to produce condensed, often hilarious film versions of Newbery Award winners. As it turns out, he was in the running for the Newbery himself for this very book, but lost out to that pesky Neil Gaiman and his Graveyard Book. *shakes fist* NEIL GAIMAN!!!

Neil may have won, but this book still has it all. Hilarity: check. Mayhem: check. A level of quirky-cool-things-per-page that is heretofore unseen: check. Jo LaRouche, our thirteen-year-old protagonist, lives with her aunt Lily LaRouche—who seems to be an aging Golden Age film star of sorts—in a wild, gaudy mansion in the California desert. Jo was dropped on the doorstep as an infant, bearing only a note saying she was a "DANGEROUS baby." This is intriguing, since for much of the book, we bear witness to Jo being possibly the least dangerous or threatening (and definitely the least weird) in a rather amusing lineup of characters that includes a vengeful Chinese millionaire, a freakish reality-show host known only as the Belgian Prankster, various cockroach butlers, and previously unheard of orders of mysterious knights.

Of course, these orders of knights include the Order of Odd-fish, for which the book is named…and as the plot unfolds, the reader finds out the nature of Jo and Lily's connection to the Odd-Fish, as well as the secret of Jo's birth and her ultimate destiny in the magical realm of Eldritch City….

Observations: I see this one appealing greatly to fans of Terry Pratchett, in its combination of silly-yet-serious. Also, like Tiffany Aching, Jo LaRouche is kind of the heir apparent to a hidden world of magical weirdness. And boy, is it weird! And fun. And hilarious. Ever read something and think, in reference to the author, "Good grief, is THAT what it's like inside your brain? Whoa, man." It takes quirky to epic heights. And as such, it might not be for everyone—the ever-growing whirlwind of bizarre might be too much for readers who prefer realistic fiction—but I thought the author maintained the balance with a believable, relatable main character who somehow manages to remain a regular girl in many ways, despite all the strangeness going on around her.

Conclusion: Very, very enjoyable. Also impossible to really describe, so you'll just have to go read it. I'd call it middle-grade-ish, but appropriate for older audiences, too.

I acquired my copy of this book at KidLitCon 2016. You can find THE ORDER OF ODD-FISH by James Kennedy at an online e-tailer, or at a real life, independent bookstore near you!
Posted by Sarah Stevenson at 6:03 PM
Labels: AF, Fantasy/Sci-Fi, Humor, Middle Grade, Reviews

Well, you brought up Tiffany Aching as a comparison, so now I have to read this! I do love fun, hilarious weirdness. Hadn't heard of this one before, so thanks for the review!

I just saw this! Thank you so much for the nice review, and thanks for plugging the 90-Second Newbery too! I had a great time in Wichita with you!

It was so good to meet you and get to hang out "after hours"! I always feel like I'm with my tribe at Kidlitcon. And it's always a pleasure to get to plug books by people I know. :)