I'm not generally a fan of weeping, though I do it at Cheerios commercials, when reading Dear Sugar, when watching little kids do just about anything precious, and pretty much when anybody else cries. I cry like a bean sídhe people, on every day that ends in -y, which is why I tend to avoid novels which contain cancer (Sorry, John Green) and parent deaths, sibling deaths, friend deaths, dead horses, dead dogs (Sorry, much of the elementary school Reading Class canon) -- but, I didn't think I was going to cry about this book. The cover is innocuous - a boy who looks slightly out to lunch, sure, but he's not crying. From the jacket flap description, yeah, the guy has suffered, but he's coping -- what's there to cry about? Yeah, right. The compelling storyline is pretty well "ripped from the headlines" of Daytona, Florida in recent weeks -- and it will grab you, and shake you, and not let go. 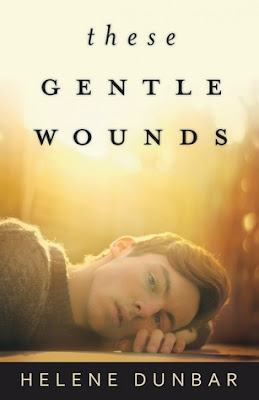 Concerning Character: Geordie has had the Life of Suck. There's really no way around it. He's a nice guy - and it's apparent from the first pages of the book - but because of The Incident, which happened when he was ten years old, he's a shell of who he should be. Most of the space inside of him is taken up with fear and loathing, nightmares, and Kevin -- his salvation. His sanity. His best friend. His only living brother, and only a half at that, Kevin grounds Geordie in what is increasingly a crazy, crazy world, and allows him to function. In spite of his "anger issues," Kevin is Geordie's home. He smacks Geordie when he needs it, and beats up the people who need beating up -- and there's always at least one. Kevin pokes Geordie in the side when he goes on one of his little mental vacations, wherein he replays The Incident. Kev's always there to wake him up, prop him up, straighten him up... and this year, Kevin's getting a few friends, with whom he smokes and drinks, which makes Geordie nervous, as the smell of smokes and booze remind him of The Incident, and his horror show of a father. Worse than Kevin's emotional distancing is the physical distance both boys know is coming - Kevin's leaving for college in a year. It's a senior year and a summer away, but as the college catalogs pile up, Geordie is already wondering how he'll cope.

Things have started looking up, a little, though. There's Sarah, the weird photographer girl in Geordie's sophomore English class who seems to want to talk to him - for reasons which remain opaque to Geordie. There's hockey -- heck, there's always hockey -- and despite the stupidity going on with another player, Geordie's awesome at being a goalie - focused and brilliant, and going places with his skill. Some days, when he and Kevin sit on the widow's walk at the top of the house, some days, he doesn't feel like he has to be tethered to the roof, or he'll fly away. If there was a way to leave the past in the past, Geordie wishes he could find it -- but, as the frayed wrists of his shirts attest, he's not quite gotten there yet. Every day is a step forward, and some days, two steps back. But -- movement and progress are happening, even gradually. Ragged and raw, but upright, Geordie is finding his feet -- until the little flashes of hope are all but snuffed out. With a letter to Kevin's dad, the darkest cloud on the horizon - Geordie's father, who abandoned him right after The Incident -- comes back, and with him he brings the monsters under the bed, the blame and the shame and the horror. Geordie's never told anyone about The Night Before The Incident, which is what started it all -- and, in Geordie's case, is what will end it all -- if he doesn't find a way out, fast.

But, if you've suffered five solid years of unspeakable disaster, and are stuck in the loop of PTSD; if just thinking about The Incident and The Night Before The Incident leaving you a rocking, humming, hyperventilating, twitching, sweating mess, what do you do? If you've kept your brother's secrets, and your brother-- who has the right to have a life of his own -- is terrified and furious and can't save you, either -- what do you do? Well, if you're Geordie, you pull your stuff together, and, no matter what it takes, you find something to salvage -- and save it. In doing so, you just might save yourself.

Helene Dunbar's debut novel will break you in all the best ways. Tightly written and keenly articulated, the storyline takes you deep into the valley of shadows, and brings you back to where the sun is just limning the horizon once again. A hard book to describe, THESE GENTLE WOUNDS is cathartic and cleansing and poignant and hopeful and -- beautiful.

WARNING: Even if you're not a cryer, this book may lead you there, multiple times. Your clue is that the title contains the word "wounds." In future, referencing books containing the word "wounds" in the title, know that you will need a.) a box of tissues, and b.) a quiet place, and c.) to fend off well-meaning glasses of water and concerned glances, as you sob. Do not read this book in the bookstore, or in the library. Do not read in the backyard, where your sobbing will scare the squirrels. Do not read on the front porch, or the neighbors will give you odd looks and ask each other if you're actually crying or just having an asthma attack. Take this one to bed, but read it on a weekend morning, or you won't be able to sleep at night, being unable to breathe through your stuffy nose...

This book comes to me courtesy of the publisher, in return for being considered for a review. After May 8th, 2014, you can find THESE GENTLE WOUNDS by Helene Dunbar online, or at an independent bookstore near you!

Hey, Tanita! What a beautiful book review, and what an awesome book this sounds like! Not that I'm a huge fan of sobbing either (which is why I pretend to myself that my dogs will be with me forever and ever), but I believe that a book that inspires a review like yours is probably worth a few dozen (thousand) tears. Thank you!

@Susan~ Hey, thanks for stopping by - so glad you enjoyed the review. I LOVE this book, and you'll want to pick it up, but sheesh, the tears - seriously, be warned! It's worth it, though. ☺