Thursday Review: THE GIRL WHO CIRCUMNAVIGATED FAIRYLAND... by Catherynne Valente

Dear FCC: I got a review copy of this book from the publisher. 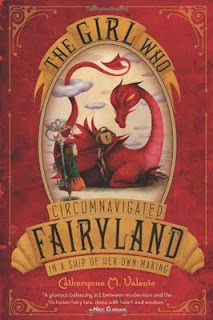 The Girl Who Circumnavigated Fairyland in a Ship of Her Own Making. It's a mouthful of a title, to be sure, but who could resist a title like that? Not me. Nor, apparently, can I resist stories of adventuresome girls who fearlessly set out to sightsee in Fairyland and end up, well, on adventures of their own making (even if I am starting to feel just a wee bit of faerie-book-burnout...).

Reader Gut Reaction: As I've just noted, this book was tough to resist just for reasons of the title alone. And though it had a bit of a rushed start in my opinion—main character September is basically just whisked away from her house in Nebraska without further ado by the Green Wind—I quickly found myself absorbed in this charming, whimsical, offbeat tale peopled with a vast range of quirky and memorable characters, from the humanoid to the animal to the animated-inanimate. There are surprises and adventures at every turn in this book, which is suitable for middle grade audiences (although fans of creatively written fantasy might enjoy this book at any age). Oh, and the illustrations by Ana Juan are pretty nifty—cute and quirky and suited to the story.

Concerning Character: September is inquisitive, determined, and brave—even when she's scared, she tries to do the right thing, and this makes her a very relatable and positive main character. (And, of course, we all like to see strong girls in fiction, making their way in the world.) Upon entering Fairyland, she quickly makes friends with A-Through-L, a wyvern who just might be part library, and who will immediately make readers (well, me, anyway) want a sweet and fiercely loyal wyvern pal of their very own. And that's only the beginning of September's adventures—yet despite the surreal nature of her new friends (and, yes, an enemy or two), they all come across as distinct and believable personalities.

Recommended for Fans Of...: Stories about magical journeys into another world, like Un Lun Dun by China Mieville (reviewed here) and classics of the genre like Alice's Adventures in Wonderland and The Lion, the Witch, and the Wardrobe.

Themes & Things: On one level, this is a rollicking magical adventure with a high new-and-exciting-things-per-page count. On another, though, it deals with themes every good adventure for young people should include: friendship (and enemies), confronting one's fears, growing into who you are as a person. I was even impressed that September's nemesis, the fairy Marquess, was not ultimately just a supervillian Col. Blofeld type but a fully-rounded character with whom one can even sympathize, and who ultimately is a major key to the story.

You can find The Girl Who Circumnavigated Fairyland in a Ship of Her Own Making at an independent bookstore near you!
Posted by Sarah Stevenson at 8:00 AM
Labels: Adventure, AF, Fantasy/Sci-Fi, Middle Grade, Reviews

I'm glad to see your review. I read this book some months ago, along with the more recent companion piece, The Girl Who Ruled Fairyland—For a Little While. Valente has an impressive imagination and an amazing command of language.

I was intrigued by this book way back when the author was writing it as a serial thing to make ends meet during a dry spell in her household. I loved how many people were drawn to the meta story idea, and wanted to read the book the character in her last book was reading...