Monday Review: THE QUEEN OF EVERYTHING by Deb Caletti

Dear FCC: I bought a copy of this book. 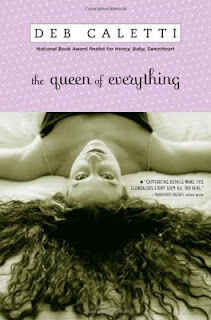 Reader Gut Reaction: This debut novel by Deb Caletti (who has since gone on to write several other novels) is suspenseful, page-turning, and peopled with a wide range of quirky characters. I knew it would be an uncomfortable read in some ways, since the premise is that the narrator's divorced father begins seeing a married woman and starts changing...and not in a good way. And it IS uncomfortable—not just for the narrator, Jordan, but also for everyone around them who can see the person her father is becoming. This is a novel that takes place internally as well as externally, with Jordan's observations revealing just as much about her character and how it's changing as they do about the events happening around her.

Concerning Character: Of course, this book tells Jordan's story, not just her father's—and so we start the story in her head, with her perspective on her boring (uh, but not for long) optometrist father, her hippie mother, her jock boyfriend, her job at the diet clinic. At first, I didn't find Jordan to be an entirely likeable character. She's snarky (though realistically so) and isn't always nice to people...but inside is a different story, and the inner Jordan's voice grows louder and louder over the course of the book. That Jordan is afraid and insecure and lonely, but she's also willing to make mistakes and take a few risks in order to do what's right. The side characters aren't as fleshed out as the narrator, but the author has a knack for making them vivid and clear by showing them in action, in combination with quick but effective sensory descriptions.

Recommended for Fans Of...: Realistic family and friendship stories with a suspenseful plot, but which are also character-focused, like Chasing Alliecat by Rebecca Fjelland Davis (reviewed here), Split by Swati Avasthi (reviewed here), and Leftovers by Laura Wiess (reviewed here).

Themes & Things: Where one's loyalties lie, particularly family loyalties—and how that loyalty is earned—is a major recurring theme in this novel. Jordan struggles with knowing whom to trust, and how to make that judgment, and she struggles with trusting herself to know the right thing to do. That theme was portrayed effectively, as she comes to terms with the fact that she is in a situation where she needs to ask for help and can't let her own insecurities or judgmental tendencies get in the way.

You can find The Queen of Everything at an independent bookstore near you!
Posted by Sarah Stevenson at 8:00 AM
Labels: AF, Realistic Fiction, Reviews, Suspense

I just want to say (in response to what you said (you know what i mean) that i completely get it. So get it that I just changed my blogpost (added a last line).

Face to face really is the thing. But most of the people I know live in different states and countries. And so.

In the same boat, here. I suppose it makes it that much more of a privilege and special occasion when I do get to see people face to face.