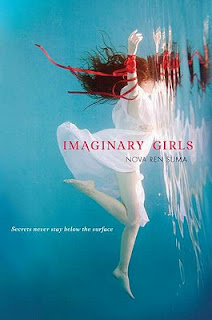 The cover of Imaginary Girls immediately caught my eye. It's gorgeous: A girl in a sheer white nightgown floats just below a rippled watery surface, suspended in bright aqua blue nothingness. Her face obscured, her skin is a ghostly pale almost green color. A red ribbon wound about her wrist streams down into the water like blood. Secrets never stay below the surface, the subhead reads. What secrets? I wondered. Is she dead? Is something else or someone else lurking underneath her? Or is it all pretend?

I enjoyed Nova Ren Suma’s middle grade mystery novel, Dani Noir, so I was eager to see what she’d do with YA suspense. The premise of Imaginary Girls is fantastic. Chloe, 14, goes to a drinking party at the reservoir with her much older, popular sister, Ruby. When Ruby talks her into swimming across the deep and unforgiving reservoir in the dark, Chloe finds a friend from her class, lifeless in a rowboat. Soon thereafter, Chloe is sent away to live with her father, without ever finding out what really happened. And then Ruby shows up suddenly two years later to take her home. But what really happened that night?

That question—and later, was the girl really dead?—kept me reading to the very end.

Reader Gut Reaction: The book is told in a first-person narrative from Chloe’s point of view, and in much of the book, we linger more in Chloe’s head rather witness each scene for ourselves. Chloe tells us what to think about Ruby, how charismatic she is, how loved by everyone. Ruby is her best friend, her savior, the one who cared for her when their damaged, alcoholic mother was drunk at the bar, and the one who later rescued her from an uncaring father. But Chloe isn’t a reliable narrator. And from the glimpses of scene and bits of dialogue Chloe has with Ruby, it’s clear that Ruby is not who Chloe thinks she is. Ruby isn’t a likable person; she’s self-centered and manipulative. As I got further into the book, I wondered if Chloe’s inability to see her sister’s flaws meant something was wrong with Chloe herself. Maybe she was crazy? Maybe she was hallucinating? Maybe Ruby and London didn’t even exist? (Yes, I have read way too many paperback thrillers.) Were there soul-hungry ghosts living under the water? Or is that idea just one of Ruby’s many nonsensical stories? (I’ve also seen one too many B horror flicks.)

I do most of my reading late at night when I should be sleeping. If a book doesn’t grab me, I’m down for the count. At times, moments in Imaginary Girls almost put me to sleep, especially the long passages of inner mind when Chloe goes on and on about how great Ruby is, but the suspense always pulled me back in. I just had to know what happened at the reservoir.

Concerning Character: Chloe begins the story with a recount of the party at the reservoir when she was 14, then cuts straight to when Ruby arrives at her dad’s house two years later to whisk her back to their home town. Ruby is everything Chloe wants to be and feels she’s not: pretty, popular, sexy, stylish, and confident. In Chloe’s eyes, Ruby has boys wrapped around her finger; boys want Ruby so much they answer to her every whim. Young and impressionable, Chloe feels the same way, willing to do anything to please her sister. Her greatest desire is to maintain that tight sisterly bond, the two girls against the world. But when Chloe hooks up with a boy her sister forbid her to see, doubt begins to chip away at her steadfast devotion.

The real Ruby is someone else altogether: the pretty popular girl who peaked in high school. Ruby is the girl who never left home, never went to college, the one who ended up in a dead-end job at a gas station, but still drinks at the reservoir on the weekends. We never find out exactly how old Ruby is, but we know she’s been stuck in the same routine for a long time. Worse, she appears to be pulling Chloe down the same path.

Recommended for Fans Of...:Haunting suspense stories about girls, discovered bodies, and secrets, like The Deadly Sister, by Eliot Schrefer, The Space Between Trees, by Katie Williams (another book with a gorgeous cover—one of the most beautiful book covers I’ve seen.), and to a lesser degree, The Basic Eight, by Daniel Handler (not a YA novel per se, but a super fun cult read with a teen protagonist and a story that fits this genre. I just loved it!)

Themes & Things: This novel is chock full of themes: putting yourself at risk to impress others, the surrealism of teen death, sisterly love, absent parents, self‑destructive parents, alcohol and drug abuse, sex. With some themes, like sisterly love, Suma delves deep, but others like absent parents or especially sex, she glosses the surface. Chloe has sex twice with two different boys (all of which happens off-camera). The first time, she doesn’t want to talk to him again. The second time, both she and the boy awkwardly and painfully avoid each other. She never discusses the situation with anyone, nor does she tell the reader how it made her feel. I closed the book wishing she had.

I found Imaginary Girls to be the kind of book that raises more questions than provides answers. But something in the back of my mind says maybe I missed something. Maybe the story is all there, like the secrets in this small town by the reservoir, if only I look close enough. Maybe I’ll read it again.

You can find Imaginary Girls at an independent bookstore near you!
Posted by Citysmartgirl at 5:36 PM
Labels: Girls Fiction, Reviews, Sibling Fiction, Sisters, Suspense

That cover IS gorgeous.

Without giving too much away, I had a lot of the same questions that you did about what was really happening, what was reality, and what was fantasy. It struck me as fitting well in the magical realism genre--which, I have to admit, I have some trouble with on occasion. (Some of it I love; some just doesn't interest me.) But this one kept me reading--the suspense was great, and keeping me even more on edge was the fact that I didn't know who to trust, if anyone--even Chloe.

There was some writing in this one that I really loved, too--literary and lyrical. I'm not sure how I feel about the ending, or what it means, but I'm definitely still thinking about it.

I'd read some reviews of this, and had read that others felt a little wistful that the relationship issues were left up in the air - a reflection of real life, I guess.

Now I want to know what happened in the reservoir. I am such a sucker for this type of suspense.