It wasn't, for Danny Lopez, the best of towns anyway. He lived in Las Vegas, sure, but he was a loner skater, and he'd never really made friends with the transient kind of lifestyle there anyway. He'd gotten caught stealing at a 7-11, and the cops and his Mom had made it this Whole Big Deal. So, Danny was fine with moving to Colorado Springs, in spite of the weird girl with the spiked hair who just wandered into his house and into his life, in spite of the myriad mega-churches in the area, and the weird new school that had zero art or music, white gloves as part of the uniform, scripted classroom lessons, and silence.

Sure, he got roughed up on the first day of school -- okay, that happens, even in a junior high with just a hundred students. He'd made friends, even though they were intensely geeky. He felt like a lot of things were off, but -- it was okay. Mom had a new job, and was making a lot more money. His stepdad, Walt, had a job it looked like he actually might keep, and all in all was kind of being less of a loser. Maybe things would be all right.

No, Danny Lopez hadn't really minded moving to Colorado Springs. It wasn't until they started finding the dead cats that things really started to bother him...

Reader Gut Reaction: In one word? Unexpected. Yeah, yeah, the title is Deviant, and I admit I initially thought the novel was speculative fiction, or would somehow veer that direction. It doesn't. It's not. It's a thriller. A middle-grade ...mystery thriller.

Concerning Character: Danny is a likable character who mostly seems befuddled through the story. I enjoyed his stubborn refusal to go along with the crowd -- whichever crowd there happened to be -- and while he wanted friends, he definitely was not a sheep. He thought things through and struck out on his own. There aren't enough novels about loner boys. The issue I had with him is that his distance from things sometimes came across as not reacting. He's required to do any number of odd things in his new school, and while he squirms inwardly, he never opens his mouth. Really? Why not? I sometimes felt the author missed chances to explore the reactions of a typical 8th grade boy. 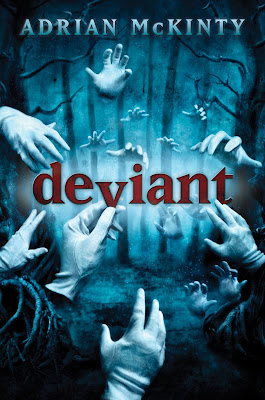 The author uses the omniscient view to dip into the brains of Walt, Danny's stepdad, and occasionally into his Mom, Juanita's head, so we can kind of see reactions and thought processes, but for the most part, seeing the reasons and thought processes of the whole cast of characters, including The Bad Guy, doesn't really help make the mystery pull together any faster. Pets are being killed and the small-town, "nobody locks their doors" atmosphere of Colorado Springs is too much for Danny, who is from Vegas where people get shot and there's always a hustle going on. The isolation of the family is effectively underscored through having had their belongings delayed in reaching them. No cellphones, no laptops, no TV -- just one wicked weird little town and its inhabitants. And their cats.

Recommended for Fans Of...: Christopher Golden, R.L. Stine, and Diane Hoh fans will enjoy this novel. Stephen King fans of his earlier work might also find something to like here. Think: creepy, baffling, and weird.

In Conclusion: Mysteries don't always tie up neatly, and this one, while solving the basic issue and catching The Obvious Criminal catches at the reader's mind, giving them first a few small clues, then a landslide of others so that the final chapter is almost redundant. While the darker thriller aspects of the novel will give older MG readers some shivers and chills, the mystery isn't terribly complex or sophisticated.

More obvious is the author's distaste for the small-town vibe of his (imaginary?) Colorado Springs, and his frequent mention of Focus on the Family, and political-religious commentary on the radio. The Brown-Lopez family seems to be a small dot in surrounded by conflicting crazy forces. In the end, sanity doesn't ever really return - the megachurches are still there, and all the rest.

That's probably more disquieting than anything.

Hi FCC: I received an ARC of this novel in .pdf form via NetGalley, and no money exchanged hands, in case you're interested.

Just in time for Halloween, you can find DEVIANT, by Adrian McKinty, at an independent bookstore near you!
Posted by tanita✿davis at 7:52 AM
Labels: Bradbury Season: October Country, Mystery, Realistic Fiction, Reviews

I have to admit that it still sounds intriguing, but...I can't help thinking it sounds creepy, and not necessarily good-creepy.

I read it, and kept shaking my head -- it's CRAZY CREEPY. The jury is still out as to whether or not it was crazy creepy in a GOOD way, but I ended up liking the protagonist, so that helped a lot... but eeeek.