Welcome to Part II of my roundup of Cybils finalists for teen Fantasy and Sci-Fi. Some of these books were library copies; others were review copies provided by the publishers for judging purposes.

For the official blurb about the winning title, Rot & Ruin by Jonathan Maberry, click here. To read the Round I panel's blurbs about the finalists, click here. 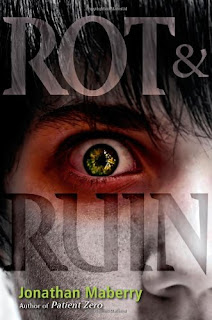 I am not a huge fan of zombie stories—let me just get that off my chest right now. I've read a few that I've enjoyed, sure, but as a premise, it's not my favorite. Now, I had heard good things about Rot & Ruin ahead of reading it, but still, it's a zombie book, and as such, I wasn't expecting to like it as much as I did. But I did like it. Sure, it was over the top in some ways—really twisted bad guys, a fairly obvious moral message, and a zombie-hunting older brother who's just a little too awesome to be true. But for the most part, the over-the-top-ness worked for the book and gave it a cinematic, "Kill Bill" sort of feel. It was violent and gory in a way that I thought was lurid and dramatic, but not so disgusting as to turn readers off. (Mostly. I can't speak for everyone.)

Although at times it seemed a little forced, I enjoyed watching Benny transition from a more simplistic, black-and-white view of the world to a dawning sense of the complexities of reality. The setting had a rollicking Wild West feel that I ended up enjoying quite a lot. The action and suspense was non-stop, and my heart was literally pounding during the climactic scene. And I loved the diversity aspects, too, namely the fact that Benny and his brother Tom have Japanese heritage. It's nicely done without hitting the reader over the head.

You can find Rot & Ruin at an independent bookstore near you! 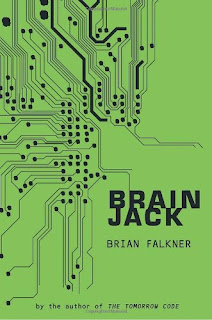 I enjoyed Falkner's first book, The Tomorrow Code, so I was excited to read this one and glad it was a finalist. Like his first book, it's very plot-driven, with lots of action and intrigue, though this one's more of a cyberthriller. It's going to be hard to talk about without giving too much away, but let's just say that conspiracies are fun, and the whodunit aspect kept things mysterious. It was a little slow to get started, in my opinion, but the action was very gripping from about the point Sam escapes from juvie onward. And who doesn't love a story about a brilliant teenage hacker getting the opportunity to save the world? (There's definitely a "WarGames" sort of feel to this one, if you've ever seen that movie.) I had a few minor issues with the way it was written—I wished it had been a little more character-driven rather than purely plot-driven, for one, and there was a little too much tech-speak for me (I kept getting distracted thinking more closely about it and wondering how accurate it was)—but it's definitely got a lot of appeal for fans of the spy novel/cyberpunk/action thriller genre. This is another author I'm eager to see more from.

You can find Brain Jack at an independent bookstore near you! 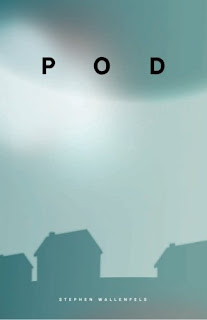 This one had some aspects I really loved, and that I think teen readers would love--the alien invasion premise is a lot of fun, and the action and tension are high throughout. We get two very distinct perspectives on the situation between Josh and Megs, learning a lot about both characters as well as the overall invasion while also showing the drastic contrast in their individual situations. They face very different sets of ethical dilemmas in trying to survive, and I'm a sucker for a good, exciting survival story. I also loved watching Megs problem-solve her way out of some VERY scary and dangerous situations, although the bad guys she faced were pretty cheesy, cookie-cutter baddies with a penchant for sounding like 1920s gangsters. One thing I really didn't enjoy (and this is probably just a matter of personal taste) was the use of animals—in both storylines—to manipulate reader emotions. However, like Brain Jack, I think that readers who prefer their books to be action- and plot-driven will enjoy this one. It's a quick read with a very classic sci-fi premise (War of the Worlds, anyone?).

You can find POD at an independent bookstore near you! 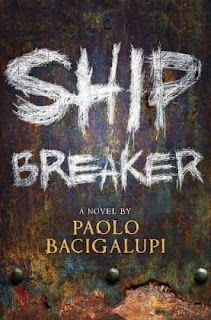 Dystopia fans will not want to miss this one. It's the story of Nailer, a young worker whose job consists of stripping wires out of old, rusting tanker ships beached along the Gulf Coast, and how his life changes forever when he makes an unexpected discovery one day. The setting is compelling, all burned-out husks of ships and drowned buildings. Yet it's conveyed without deluging the reader in too much detail, an aspect of the writing that really impressed me. In fact, the story started off with action, which grabbed me right away. And the tension remained high throughout, which kept me reading. There was a philosophical angle to the story, but it didn't talk down to readers or insult their intelligence by being too "teach-y." The characters were three-dimensional with realistically messy motivations and desires, even the villains, for the most part. It was easy to root for Nailer and get caught up in his saga, and the changes in his character over the course of the story were very satisfying. I also really liked the multicultural (and, indeed, multi-genetic) aspects of the world setting in this one. There were a few common, recognizable fantasy tropes at work, which might make the plot predictable for some, but I didn't find them bothersome—in fact, for me, they tied everything together very tightly and gave Nailer's story a sort of quest-like inevitability. I very much hope to read a sequel.

You can find Ship Breaker at an independent bookstore near you!
Posted by Sarah Stevenson at 8:00 AM
Labels: Adventure, AF, Dystopian, Fantasy/Sci-Fi, Guy Appeal, Multicultural Fiction, Sibling Fiction, Suspense