A friend reported buying a new bike, only to see the "umptymillioneth" snowfall in the midwest, so she, like you, may be in need of a little cheer. While taking a little break from my revision, these are some things around the web which have made me smile today:

That handlebar 'stache thing -- Dan vs. Ward, over at Jules' blog. I haven't been able to think of a good cartoon caption, but I giggled reading the ones already there.

The guy who built his own Muppet Theater -- from scratch!! Because, yes, I am just a big enough dork to fully geek out over the awesome of that. 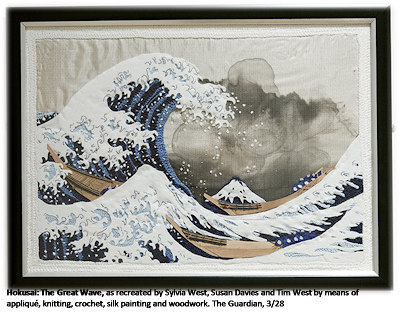 Yesterday Leila highlighted the awesome that is Jillian Tamaki's artwork for Penguin, today the Guardian features The Materialistics and their take on classic art. It's flat out amazing. I'm excited to learn that in December 2011, they're doing a show depicting children's books! Yay!

Message in a bottle - it actually showed up! The bottle was launched when the boy was five; now he's 29, and it's been found by a thirteen-year-old boy in another country. They plan to be pen pals, which is the coolest thing, ever.

Twin babies chatting. Yes, ABC is totally late on that one, as the video came out in February (and may I take the opportunity here to say how much I despise the word "viral" in the whole video craze thing?) but as a nation, we're so stressed out that Twin Babies Doing Anything Cute is a happy place to be. Imagine Shannon Hale's world just now. Her double-trouble duo are too cute.

Since the Bronx Zoo Reptile House is closed at present, mental_floss did a handy list of all other great animal escapes. People are strange: we go to the zoo to see captive animals, but paradoxically, people tend to cheer for escaped animals. Remember Freedom? (That cow is a whole picture book by herself.)

This made me guffaw in a rather unkind way... there's a new company starting up called Cloud Girlfriend... they provide... fake... girlfriends... for Facebook. No, really.

As usual, the world is stranger - and funnier - than we imagined.
Happy Wednesday. Posted by tanita✿davis at 4:35 AM
Labels: Random Notes and Errata

I love those handcrafted masterpieces! I'll definitely be sending that along to Rob. :)