Reader Gut Reaction: Once Upon a Time (and I have told you this story before, yes) I was kind of a cowgirl. I worked at a summer camp from the time I was sixteen, for six awesome years. I had the boots. I had the curry comb. I had the hoof pick, -- and the shovel. I knew how to use them all. I bucked hay bales. I had that squinty-eyed look you get from not wearing sunglasses, but wearing a hat to shade your eyes. I smelled like horse for part of each summer, eleven weeks a year.

It wasn't enough. I started working weekends and winters at the camp when it was more of a dude ranch and convention center. I didn't get to ride much, but I got to be there while others did. I hung with the boys and chewed on wooden matchsticks.

No, seriously: I did. For years that was part of my 'tude. (Oh, stop laughing. I thought seriously about going Goth right after that.) 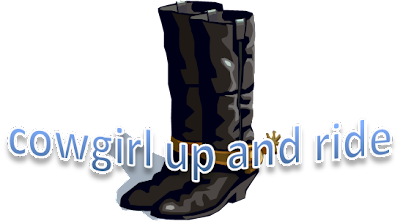 But, then, I started to feel slightly silly about it. I mean, come on. I'm an African American. I don't even really think I like Charlie Pride. And, there's no such things as black cowgirl and cowboys... right?

Well, wrong. Once upon a time? That's about all there were...

Gut reaction? G. Neri makes me want to get out my kickers, cowgirl up, and ride.

Concerning Character: Coltrane is quote possibly the BEST boy's name, ever, and though he is indeed a little punk when the story begins, he's mostly a scared punk who knows he's finally screwed up so badly his Mom is through with him. That's a terrifying feeling, and in his fear and insecurity, he kind of grows on you - and turns out to be lovable, with a smart mouth. Harper, the horse-loving father he ends up with, is also in a bad spot -- pissed off and scared of dealing with his kid, yeah, but there's other stuff going on, too, stuff that threatens to end the way of life he loves. But, he deals. That's the Cowboy Way. 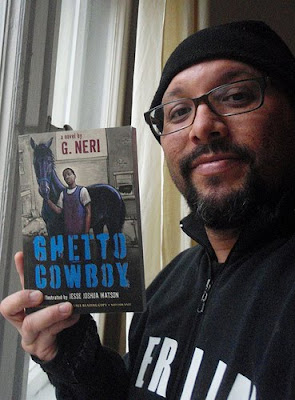 Recommended for Fans Of...: You know what? There's about NOTHING that compares to this book - because it's a modern story pairing black people with horses, and we just don't get those! (PLEASE, if you can think of a book or two, speak!) However, two other middle grade novels come to mind - The Adventurous Deeds of Deadwood Jones, by Helen Hemphill, and of course, the CSK Award winner in 2010, Vaunda Micheaux Nelson's Bad News for Outlaws: The Remarkable Life of Bass Reeves, Deputy U.S. Marshal. (Photo credit: Author G. Neri with ARC of his book, from his blog.)

Themes & Things: I very much love G.Neri’s dedication in this novel- Rise Up,and Ride On. Seriously, In rodeo parlance, that’s what this novel is about: cowboy up and ride, don’t lie there and bleed. Rising above the crap in a life – be that poverty and a bad school experience, a run-down, gangster-ridden neighborhood, divorced parents, or whatever –and riding on, getting above the whole experience, and knowing that the higher you are, the further you can see, and that there’s more to life -- that’s the theme. The Cowboy Way is to get up and deal, and to move on.

And all of that profoundness is wrapped in a funny, sad, tragic, wry, and very real story.

Authorial Asides: One of the BEST surprise of the book for me were the illustrations -- Jesse Joshua Watson (illustrator also of G. Neri's Chess Rumble and the breathtaking I and I, by Tony Medina) really makes the imagination sing. Also, the Life Magazine cover photograph at the conclusion brought me joy. There ARE real black cowboys, and G. Neri got to hang with them and ask questions.

That is just too cool.
Get your boots on, boys and girls, and be who you think you are.

And now here's the part where you'll want to slap me: I read this book as an ARC on NetGalley, with an invitation from Candlewick Press... aaaand, it's not going to be out until August 9th. BUT! that's just in time for a back-to-school giftie, right? Don't cry, now, please?? It's coming. In August, you'll find GHETTO COWBOY at an independent bookstore near you!
Posted by tanita✿davis at 3:21 AM
Labels: Ethnicity and YA Literature, Guy Appeal, Middle Grade, Realistic Fiction, Reviews

Sounds like a great story, though. I also wanted to mention that Greg is a Cybils winner this year for his graphic novel Yummy--very talented author! Also very nice (I met him at a past SCBWI conference).

This sounds fantastic - I was so impressed with his storytelling with YUMMY but I'm really glad to see him writing a happy story (not that there was anything wrong with YUMMY but the man needed a break after that).

I'll be requesting a copy of this for sure and review it this fall. We totally need to get the word out on it.

PS. I confess I had a big affection for Charlie Pride as my father loved his music alot. I can actually sing most of "Kiss an angel good morning and love her like the devil when you get back home" if you give me a minute.....

"Be who you think you are" - what a great take-home message!

My capcha word is "traptut" - lik we're going to put the boy Pharaoh back in his tomb. LOL!

I heart netgalley. Waiting until it gets closer to the release date to read Ghetto Cowboy. I love the cover.

I wish Neri's novel Surf Mules got more attention. Its so good. Actually that's true of everything he has written.

I am African American, a woman, and a cowgirl, from a long line of Cowboys and Cowgirls. I was born, raised, and live in Oakland, California (about as 'ghetto' as you can get) -- in an especially inhospitable part of an inhospitable city -- and yet I own two horses. I travel two hours by train every weekend to work as a ranch hand on a cattle and performance horse ranch in exchange for lessons on working cows. I compete in Team Penning and Ranch Sorting, and I'm learning Cowboy Mounted Shooting. I have ridden in the Black Cowboy and Juneteenth Parades every year, and competed in the Bill Pickett Rodeo (a rodeo that celebrates Black Cowboys).

My family founded a program that brought horses to inner city schools, and educated urban youth about Black Cowboys and their role in history. Unfortunately, the city bullied all of the Black owned stables out, making such programs impossible to continue. In fact, the only stables you'll see around here now are all fancy, English stables up in the hills.

So thank you for posting this. I will be buying three copies of this book: one for myself, one to donate to my local public library, and one to donate to my niece's elementary school. I hope some kid picks it up and gets inspired to find us. We're still out there.

I totally had a brief cowgirl phase. I loved 'riding' horses (y'know going on vacation and riding for 1 hour about 2x a year. lol). I definitely want to see more books about Black cowboys and cowgirls. I even blogged about ithttp://blackteensread2.blogspot.com/2010/11/go-west-young-minority.html And people gave me some (historical fiction though) recommendations such as Black Storm Comin by Diane Lee Wilson and Wrango by Billy Burks.

I can't believe you're teasing us like this!!! I don't actually want August ot be here because that means more school but I want this book. *cries* :)

Juliene, I'm sorry to hear that your program and the others like it weren't able to continue. I still think your accomplishments are inspiring! Thanks for stopping by.

Ari--so funny. I had a couple of friends in high school who were into horse riding, one of whom went to a dude ranch in Colorado with her family every couple of years. I went riding with her approximately twice, and the second time, the horse tried to roll on me. I am clearly not meant to be a horsewoman!

I know, my peeps - I should have waited to review this, but I'd READ IT and I couldn't not talk about it. Sorry-sorry-sorry!! I will remind you all.

Juliene, if I still lived in the Bay Area, you and I would need to get together. I used to ride above Placerville - some amazing space and trees up there. THANK YOU for what you do - and I truly hope people DO come and find you. I think they will, this is a powerful book.

Doret, I am very much realizing that G. Neri is QUITE a writer and I will be looking up his backlist - thanks for the recommendation.

Ari, I have a lollipop for you, so stop that crying... and I LOVE Go West, Young Minority. That makes me happy. :)

aquafortis, you know we're just going to have to get you back on a horse, now...

Hey y'all--
Lovely words to read about my book, and so early that it gives me hope it'll find its way into the world. Nice to hear there are cowgirls out there too!

THANK YOU, Mr. G., for coming by, and for your book. We really appreciate the work you put into making a heart-touching story that, as Jane Yolen puts it, "tells the true."

(And Colleen, you KNOW I'm going to make you sing some Charlie Pride to me. It is GOING to happen.)