BBS, Stack Xchange, and Other Things to Pass On

Greetings! In case you haven't been pointed that direction for your reading and commenting pleasure, the Brown Bookshelf is doing their yearly celebration of African American authors new to the YA/children's literature scene. There is some FUN STUFF going on there -- including...

~ A recent BBS post introduced Knopf author Christopher Grant, author of TEENIE, of which the School Library Journal says “enjoyable reading experience” with “realistic descriptions of teenage life and appealing characters.” While he's not writing about very short protagonists, Mr. Grant is an economist and equities trader by day, and a YA novelist by -- weekends? Afternoons? -- and claims to have almost run some kids down to get to the last Harry Potter book. A man after our own hearts, yes?

~ Finally, you'll love funny girl Crystal Allen, whose debut middle grade novel, HOW LAMAR’S BAD PRANK WON A BUBBA-SIZED TROPHY (Balzer + Bray/Harper Collins), is rolling in starred reviews. Readers will be rolling up to try their own trash-talking on the bowling lanes. Go and check it all out -- you'll be excited about the future after reading these positive culture-celebrating books.

Speaking of culture celebration, blog bud Trisha recently reviewed Jazz in Love by Neesha Meminger for the Kirkus blog. Trisha enjoyed it, but found it slightly predictable, to which Neesha replied that sometimes, "predictable" was really, really good. In a thought-and-heart provoking response at the YaYaYa's, Neesha explains why. Read. Reflect. And then, reflect some more... 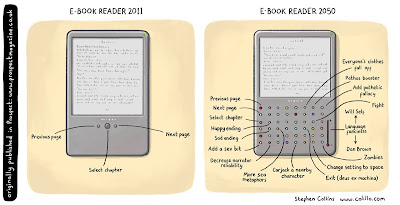 While we're not quite to this level of complexity of ebook readers -- we're close!! (I like the button where you can add zombies; click to see it full-size.)YA writers who've asked about retaining ebook rights to their work have more often been told that ebooks aren't catching on with the YA set. Several of the largest publishing houses reported only the smallest interest, and sales at 5% or below in 2010. Here we are, practically five minutes into 2011, and already the New York Times reports a BIG change. How we buy and read is changing every day. How will that change how we write?

Finally, here's a tool in the hand of writers -- a place to ask all of Those Questions. Normally, when I need to know something weird, I just hit up Google and hope they never give the Department of Justice a list of just where some of the weirder questions come from about, say, poisons and how long it takes someone to die, and whether or not certain things in combination could be fatal...For those not willing to risk that DOJ questionnaire, there's The Stack Exchange, where no one will think you're insane, just a writer. Ask about ways to render someone unconscious without seriously injuring them, discuss how long it would take to cross a city if your character could only make left-hand turns. Want to talk about the habits of good writers, find out how to revise something when you're not sure if the end needs changing, or you just feel like you've got to give back to the writing community and you have a lot of knowledge and experience to share? This collaboratively edited question and answer site for authors, editors, reviewers, professional writers, and aspiring writers may just be for you.

Have YOU read anything interesting this week?
Posted by tanita✿davis at 1:27 AM
Labels: Random Notes and Errata

Wow, you've been busy! What a great set of links. I especially love the cartoon (and, in fact, I have cartoon envy!) and will be passing that one along.

I'll have to look for those reads from the Brown Bookshelf, too--all sound intriguing.

Yes, yes, yes, I am reading something interesting: a novel called Agaat, set in South Africa. Translated from Afrikaans. It's for adults, and although I am SO unfamiliar with the many place names mentioned, I'm finding it pretty good.

Gotta get that Bubba/bowling book! Sounds like our kind of reading.

Thanks for all the love! Crystal Allen

Susan, I'm excited about what you're reading!! Some great stuff.

Crystal, thanks for stopping by! We're really glad to "meet" you!