I'm always amused by the fact that my reading seems to come with patterns and themes. Even choosing books at random within this genre, I can always find a common thread. Today's random choices netted me a couple of really great dystopias and a surprisingly complex and satisfying werewolf novel, all three with female main characters who others strove to control, but who in turn busted out of that control, and challenged or changed the options in front of them. Not all of their impulsive moves paid off. Some of them were outright stupid. Is it always better to jump up and do something if you're sure there's nothing left to lose? These girls voted YES. Intrigued? Do read on... 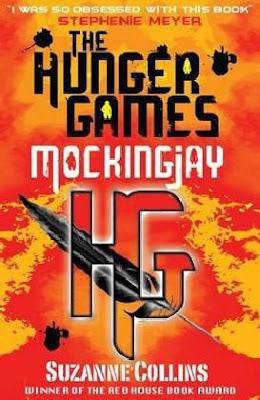 Mockingjay(Hunger Games 3), by Suzanne Collins was a long-awaited sequel, after last year's Cybils and the rather cliff-hanger ending (this is the UK cover, which is what I got!). Spoilers would be tragic if you haven't yet read this novel, but let's just say that it's the first book in the theme that emerged from today's reading: Katniss is a girl out of control. She's left the Games and is out of the control of the Capitol, out of control in terms of where she's ended up since her massive injuries in book 2, and out of control in that she's being asked - badgered, really - into being a symbol, all over again. Wasn't it enough that she was dolled up and prettified and filmed for the folks back home? Wasn't it enough that her life was a lie broadcast in high-def? No... and it's time for one more big show. Nerve-wracking, pulse-racing tension fills this last of the Hunger Games novels, but there aren't too many surprises. The tension Katniss feels between Gale and Peeta is resolved in a way which may satisfy some readers and exasperate others. All in all, fans of the series will be satisfied that it's over when the last page is turned. (And if that's not the most red-herring, euphemistic, spoiler-free statement I could make, I don't know what is...!) Meanwhile, if you're jonesing for more from the author, don't miss Gregor the Overlander, the MG series which Collins wrote first, and which many of us missed. 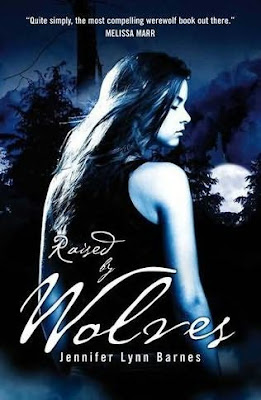 Raised by Wolves, by Jennifer Lynn Barnes: Bronwyn knows she's lucky, deep down. She alone was saved at the age of four, when her parents were slaughtered in a brutal werewolf attack. Her "scrappy" demeanor, and an elevated fight/flight reflex sent her deep into hiding, and the timely arrival of a nearby Alpha and his trusted lieutenants meant that the lone killer was dispatched, and Bryn was introduced into the world of the weres. She's the ward of the Alpha, and her foster mother is a human married to a were. Her best friend, Devon, is a were, and the pack is all that she knows. It's also all that annoys. Bryn hardly remembers the attack anymore, except for bits and pieces, but she does know she's human -- and one of a kind. It's not easy being the weakest link, being told when to jump and how high. A little rebellion makes Bryn's life easier -- or, it used to. Right now something's going on -- and everyone is shadowing her, guarding her, and making sure she's insulated from finding out the truth...

Which is that there's another new wolf in the Alpha's cages, making the difficult transition from ravening beast to were human... and he wasn't born. He was bitten.

Now that Bry's found another survivor, she's desperate to talk to him, even against her Alpha's orders. Why is everyone so afraid of letting them connect? What harm could it do?

This smart, complex novel will probably crossover for older readers as well. The things Bryn finds out, and what she does next keep up the fast-paced action and the tension will have werewolf and junior CSI fans alike turning the pages to race to the end. 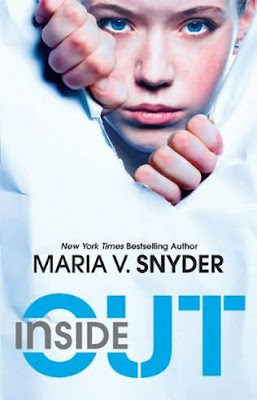 Inside Out, by Maria V. Snyder: (First can I say how much I love this cover? I like the punching-through-the-wall view, and the girl's face is pugnacious and determined rather than predominantly pretty. If one had to show a face - well done on that.) Trella has a routine -- push through the crowd to the cafeteria line. Shoulder to shoulder with hundreds, eat the bland goop scooped out for workers. Check the tools in her tool belt. Check in to work. Follow her scrubbing machine through the tunnels. Finish work. Push through the crowd of hundreds to escape into the maintenance pipes and find a place to be alone. Fall asleep alone. Waken. Repeat.

Trella is a scrub, one of a million other lower level workers who scrub and polish and fight the rust in the pipes of the Inside, so that the Uppers can have a nice, clean world. Trella is just one small gear in a big machine, and it's hard for her to care about anyone or anything.

There are always prophets in the lower levels, people who talk about Outside, a place where all of those Inside should want to go. Trella knows it's just the regular propaganda crap spewed by the Pop Cops -- the Population Control Officers. She would just blow it off, except that her one friend, Cog, can't stop believing.

Just once, Trell lets him drag her off to listen -- and a microsecond of belief gets her caught up in a revolution just waiting for a leader.

A nostalgic revisit to an underground dystopia which will seem very familiar to fans of The City of Ember, this novel touches on issues of class, community and trust -- and how taking a leap of faith can be the something that changes everything.


You'll find INSIDE OUT, as well as RAISED BY WOLVES and MOCKINGJAY, at an independent bookstore near you!
Posted by tanita✿davis at 12:24 PM
Labels: Crossover, Cybils, Fantasy/Sci-Fi, Reviews

I love that Cybils bookmark icon. I need to get some of that!

INSIDE OUT definitely looks like something I'd want to read...I can't resist a good dystopian.

I love Barnes' work so much that I bought Raised by Wolves without reading it, so I'm glad to see it will be okay for MG. I'm hoping to read it this weekend...

Andi: I made my own bookmark - it's not on the Cybs site, but I stole their picture!

Mrs. Y: Y'know, an older MG could read that just fine, I think - there's the whole "werewolves bite" violence issue, but that's about it. I am on the YA SFF team, though! :)