I frequently find myself wishing that there were more good mysteries written for the YA audience. One that I really did enjoy (and which was a Cybils nominee a couple of years ago) was Norah McClintock's Dooley Takes the Fall. 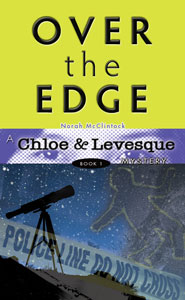 This Canadian author's series of YA hardboiled detective books—the Chloe & Levesque mysteries—are being re-released in paperback by Kane Miller publishing. I missed these before, if they were ever released for a U.S. market, that is. But the folks at Raab Associates unexpectedly (and a bit fortuitously) sent me copies of Book 1: Over the Edge and Book 2: Double Cross.

These mysteries are structured in a traditional detective style, but with a twist—the primary crime-solver is narrator Chloe Yan (a mixed-race protagonist—yay!), a high school student, whose new stepfather, Louis Levesque, is the chief of police in the small town of East Hastings. There are a lot of subtle threads in this series, from Chloe's slow acceptance of her new stepfather, to her difficulty adjusting to life in a new small town after growing up in Montreal. These create a nicely textured backdrop to the mystery action—and, of course, as implied by the title, Chloe and her stepfather end up as reluctant teammates in finding solutions to the crimes that take place. 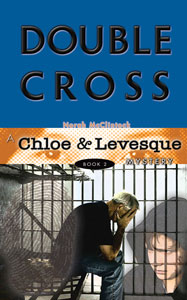 In Over the Edge, Chloe has to use her nosy school-newspaper skills to sniff out foul play in the suspicious death of a classmate. In Double Cross, Chloe goes to great lengths to help a guy at school—Jonah—try to clear his father of murder, even if that Jonah is...kind of a jerk. Clearly she's someone with principles, and her bulldog-ish persistence and clear sense of right and wrong lead her to try to help address injustices, even when it leads her into real danger. What I like is that it isn't artificial-seeming or wimpy danger—there's genuine tension and suspense. Again, I'm happy to see more of McClintock's work and I'm pleased to see some more good YA mysteries. These are listed by Amazon as suitable for ages 9 – 12, but I'd probably say 11 and up, myself, unless we're talking about mature readers—I'd definitely consider them YA and not MG.

Buy Over the Edge and Double Cross from an independent bookstore near you!
Posted by Sarah Stevenson at 11:07 PM
Labels: AF, Mystery, Reviews

These are both in my November column - I loved them as well. The next two books in the series are due from Kane Miller in March and I'm really looking forward to them.