This year Cybs noms have revealed quite a number of authors who normally write for adults joining the party. Jennifer Lynne Barnes impressed me with her novel, and now Carrie Vaughn is impressing the heck out of me as well. (James Frey I was not so impressed with, but we can't all win.) I'm always pleased to welcome to the genre more people who can tell a good story, so woot! 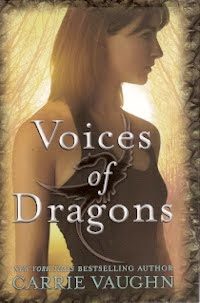 Voices of Dragons, by Carrie Vaughn: High school junior Kay Wyatt just likes to push her limits -- she isn't out to hurt anyone. So, free-climbing alone, on the outskirts of Silver River, really, really close to the off-limits border of Dragon --? Eh, a little bending of the rules, yeah. It's the only kind of freedom she can get, though. Kay's Dad is the sheriff of Silver River, and once he actually pulled her over for speeding.

Yeah, it's like that. Kay's always got to be an example.

So, when she falls climbing into the famous silvery creek, and is carried away downstream, she's glad to fetch up against something solid, and maybe get out of this whole thing without anyone finding out. Of course, when that "something solid" curls around her and lifts her out of the water, she's not so much glad anymore as blind terrified. She's run smack into a dragon -- and human kind has been at an uneasy peace with them since World War II. Kay knows that her fall has put her in dragon territory, and legally, she could be killed or imprisoned for this. There is to be NO crossing that boundary, no interaction between the two species, and no getting back the territory that humankind ceded to them so long ago.

On the other hand, if the dragon doesn't eat her, this could be so amazing...

Vaughn has created a really likable character who has a lot of questions about herself, about the reasons for the things that she does or doesn't do (she thinks she's the last virgin in her town), and the reason the world the works the way it does -- or, doesn't. She doesn't condescend to her YA readers, as she brings Kay into contact with racism/species-ism, the possibility of eradicating a whole people, and the reasons for and against war. Eventually, Kay has to defy her parents, her friends and her government to do what she feels is right. The character's riveting choices and consequences make for a good, solid read.

Voices of Dragons stands well on its own, but Vaughn has left room for a sequel! A good read even for older MG'ers as well. 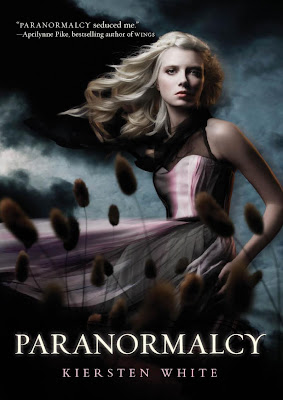 Paranormalcy, by Kiersten White: Evie thinks life is pretty routine -- more like borrring, really. I mean, when all you've known since you were eight is an on-call job identifying and collaring paranormals for the International Paranormal Containment Agency, things are bound to be a little dull, even trolling through the Faerie Lanes. Sure, the IPCA is up in arms because someone or something is taking out tons of paranormals, but as usual, nobody's telling Evie anything.

Evie's life is all in shades of white -- so she wears crazy bright clothes, and insists on a pink hilt for her silver knives, and a pink, sparkly Taser she calls Tasey. She's surrounded by adult paranormals, so she plays up her age -- and her favorite mermaid, Lish, enjoys her silliness, too. But sometimes, none of that is enough. Evie wishes dearly that she could go to school, have a locker, have a boyfriend -- a human one, please, no faeries need apply -- and go to prom. She just wants to meet teens like herself -- instead, she's lonely and bored and her only interaction with high school is on the small screen when she watches her favorite TV show.

Things look like they're going to be terminally dull, until she meets a paranormal who changes... well, constantly. He's never the same -- and after meeting him, neither will Evie ever be.

This is a quick-paced, charming novel which actually deals with some underlying serious issues even as it entertains. Though we could wish for a cover with a bit more of Evie's personality (and a Taser, if anyone's listening), this novel seems to be a solid start of a great series. Evie is all brash moves and big talk, but underneath she's vulnerable, scared and uneasy, which makes her a realistic character, and a likable one. The IPCA is also a completely realistic, ridiculously hidebound organization, lost in paperwork and meetings, and missing the point of so many things. I can't wait to see what happens to all of them next.

Birthmarked, by Caragh O'Brien: Gaia lives fairly happily with her tailor father and her midwife mother in the village of Wharfton in Western Sector Three, near the banks of Unlake Superior. It's been three hundred years since there was water in that lake, since the "cool age," where there was technology and advances for everyone, but there is wealth for some, within the walls of the Enclave. The elite live in seclusion, and a wall separates the villagers of Wharfton from their betters.

Gaia has just delivered her first Western Sector Three baby alone, and is feeling a little bittersweet -- she's proud of her work, but has had to advance the child -- meaning, she's taken him away to be raised inside the Enclave -- and the mother is hysterical and unwilling.

It's awful - but it's the law put into place by the Protectorate: every midwife must give the first three children born each month to the Enclave to be raised -- or else. As the mother weeps and screams, Gaia heads home to commiserate with her mother.

A chance meeting with her mother's assistant leaves Gaia with a mysterious bundle of papers she can't make sense of, and instructions to leave, this very night, and run for her life. But Gaia can't leave - not if what Old Meg says is true -- that her parents have been arrested by the Enclave.

What have they been arrested for?

By the time she arrives at home, an Enclave soldier is waiting. The house has been searched, and her parents truly are gone. The slate-eyed soldier wants to know something about records -- lists -- some kind of notes her mother keeps. And Gaia has no idea. All she knows is that she must get inside those walls of wealth and privilege and rescue her parents -- because she can't trust the Protectorate, and without that trust, her service to the Enclave is a lie.

This book is -- intense. There just aren't a lot of YA novels about midwifery, inbreeding, and hemophilia, but the information is gripping and spot-on (I mean, in terms of making it realistic. I'm not into any of the above, thanks). The post-apocalypse survival narrative is excellent, and as she gets deeper into trouble, Gaia has to make agonizing, hair-trigger decisions based on only what she feels is right. Though she thinks on her feet, and does all the right things, situations just get darker and worse as she goes on, based on the cruelty of the Enclave and the utter selfishness of her society. This is dystophia at its finest - allowing the reader to think and say, "What would I do?" I hope there's a sequel to this one, too.

You'll discover Birthmarked, Paranormalcy and Voices of Dragons on shelves now at an independent bookstore near you!
Posted by tanita✿davis at 5:28 AM

Oh, no, more for my TBR list...Voices of Dragons and Birthmarked just sound way cool, and I keep hearing buzz about Paranormalcy--glad to hear it's a fun one. I was worried it might be all hype.

I liked Paranormalcy lots too, A.F.! It was very entertaining.