Patrick Ness: Why Do You Do This to Me? 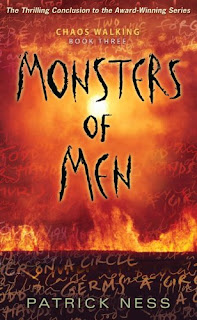 When I first read The Knife of Never Letting Go, the first volume of the Chaos Walking trilogy by Patrick Ness, I was absorbed. I was horrified. I was swept right along. And then I was MAD. Because it ended at possibly the most intense and stressful moment of the story. If you've read it, you know what I'm talking about. I cursed Mr. Ness roundly and then went about my life until such time as one of my fellow GLW contributors sent me a review copy of the second book. Oh, I was thrilled, just as I was thrilled when I got the privilege of reading an advance copy of the last volume recently.

And what can I say? This is one of the most striking series I've read in quite a while, period. It's raw and honest—because, of course, each of the male characters has his "noise," making his thoughts audible to everyone within range. But this series isn't just about what happens when everyone around you can hear what's running through your mind. It's also about deception, and how deep the roots of deception can go. It's about devotion, and how love can be powerful enough to fight back hatred and greed. And it's about redemption, asking the question of how far you can go before you are irredeemable.

This final volume asks the question of whether redemption is possible not just for the horrible deeds humanity perpetrated on the Spackle—the native people of the planet where this trilogy takes place—but also for individuals who have committed terrible wrongs, driven by a panoply of motivations from desperation to love to greed to hunger for power. Can the warring groups of humans and Spackle manage to reach some sort of truce before the new convoy of human ships arrives? We're talking about a lot of just plain not-nice people, as well as nice people who are driven to do awful things. Can they learn to get along before they destroy themselves and the entire planet? Is even Mayor Prentiss redeemable somehow?

And what of the planet's native sentient species? One of the most fascinating aspects of this final volume is finally learning the history and the customs of the Spackle—who call themselves the Land—and getting their point of view. As always, Ness brings you to the brink of complete and utter despair again and again, and I'll leave it to you to read to the end and find out whether, ultimately, there is also hope.

One more thing: If you haven't read these, and you're a fan of dystopian sci-fi or fantasy at all, for god's sake go get them NOW. Just be warned: they're hard to put down and hard to get out of your head.

Monsters of Men will be out next month in hardcover. For more on Patrick Ness, check out this excellent profile on Publishers Weekly.

Buy Monsters of Men from an independent bookstore near you!
Posted by Sarah Stevenson at 8:40 AM
Labels: AF, Fantasy/Sci-Fi, Guy Appeal, Reviews, Suspense

I'll be honest - I haven't read this yet. During Cybs, I SWALLOWED the first two books, whole. Within a day of each other.

I'm sort of terrified of the third, to be honest. My nerves are stretched to the breaking point. I don't even know what to hope for...

...so, you'll pardon me if I don't read your whole review; I know there are no spoilers, but I'm still a little too shellshocked to even think about this book yet.

I go and caress the bookstore copies of the tome, however. Weekly...

Nervewracking is right. And believe me, this one will stretch your nerves right to the very end. So wait if you must. It's reeeallly good, though....

I would never have read The Knife of Never Letting Go if it hadn't been for my high school. This was a required book that we had to read, so I started to read it, and was hooked. As soon as I finished it, I ran to go get the second book. I'm going totally insane waiting for the third book to release and can't wait for it! I'm even more excited, because around the same time Monsters of Men comes out, Patrick Ness will be coming to my school to talk about his book! I can't wait to read Monsters of Men!

Kaylz, I am now OFFICIALLY JEALOUS.
SO, so, so jealous.
I'm so glad that you had an awesome English teacher who introduced you to it, and again I am SO JEALOUS that Patrick Ness is coming to your school!!!!! That will be so cool.