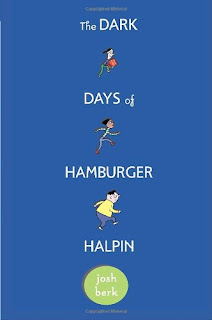 I read a couple of good "guy books" this month (yeah, you thought I was talking about "good guy" books, didn't you?). I found both of these sort of randomly at my library, but I have to say that the ultimate reason I picked up Josh Berk's The Dark Days of Hamburger Halpin is that he said something so hilariously funny in a tweet that I had to know what a whole book was like coming from such an amusing source.

A book about a deaf teenage guy, FUNNY? Has my sense of humor, you ask, devolved into some kind of netherworld of poor taste? NO! No, it has not! You see, Will Halpin—also known by his IM handle, HamburgerHalpin—has decided on a life course that is deadly serious: he's decided to go mainstream. That is, he has chosen to go to the mainstream high school rather than continue in the more insular environment of the deaf high school, a decision that has cost him most of his deaf friends and also means that he's now somewhat of an anomaly at his new school, despite being a champion lip-reader.

And now, he's also got a mystery to solve. Oh yes, this book is also a rather madcap whodunit. What makes it so funny, though, is Will Halpin's narration. His outlook on life, his pithy comments and humorous observations (because he is, by default, an observer), even his nicknames for people cracked me up. You'll just have to read it to find out who Jimmy Porkrinds is. Though a bit light on backstory, this one makes up for it with a truly distinctive narrative voice, a memorable set of characters, and a good mystery.

Buy The Dark Days of Hamburger Halpin from an independent bookstore near you! 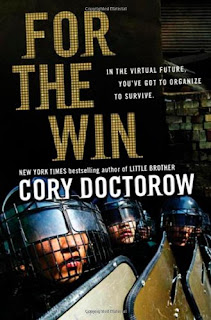 I still haven't read Cory Doctorow's Little Brother--it seems like it's on perma-checkout at my library—but I DID fortuitously run across his next book for young adults: a massive (pun intended) online gaming epic titled For The Win.

I liked a lot of things about this book. If you've ever been involved in any kind of role-playing gaming, online or offline, you'll enjoy the familiar gaming lingo. And if you're familiar with classic video and computer games, you'll get the references (I particularly liked the idea of Mushroom Kingdom, an online game set in Nintendo's Mario universe).

I also liked the premise. The setting is not so far into the future, and online gaming has become a enormous corporate venture comparable in scope with any other major industry, with huge portions of the gaming market owned by Coca-Cola (HA!) and all kinds of unscrupulous underworld types dealing in a thriving not-so-black-market of virtual game gold and valuable in-game items. These "gold farmers" employ young kids in sweatshops all over Asia, purportedly paying them to play games all day, roaming the game universes in gangs, highly trained to win the greatest amount of gold possible from in-game quests, which they then re-sell to the highest bidder. But what happens when those sweatshop workers decide their conditions should be just a bit better, when they decide they have rights just like any other worker? At heart this is a book that drives home the value of unions during a time when they seem to be falling out of favor, and because of that alone, it's critically important.

But. There are a couple of things that kept this book from being as awesome as I feel it could have been. Number one is the fact that it is an extremely convoluted story with at least six major point-of-view characters, plus a few more, constantly shifting from subplot to subplot, with the occasional explanatory authorial-voice section thrown in to boot (which drew me out of the action and sometimes confused me further). If you can't sit down and read this all in one incredible mind-blowing binge, it will probably be hard to follow what's going on. I didn't take more than half a day's break between reading sessions and I found myself getting lost. Characters who were point-of-view characters earlier in the book stopped being POV characters and other characters took over; brand-new ones occasionally popped in and added a new strand to the story; and these were all wonderful and compelling characters, don't get me wrong. All of them were important to the EPIC PLOT OF GARGANTUAN COMPLEXITY. And the tone was good, and the writing was good. But there were too many rapidly shifting storylines for my addled brain to handle, apparently.

Buy For The Win from an independent bookstore near you!