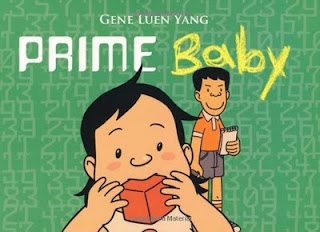 Gene Luen Yang's latest, Prime Baby, is a graphic novelization of a serial that appeared in the New York Times Magazine's Funny Pages--a site that's new to me but which seems to have serialized a small number of graphic novels so far. Kudos to that! Anyhow, from the humorously redacted jacket blurb to narrator Thaddeus Fong's precocious backtalk to the pink sluglike space aliens, this very quick read should spark laughs for readers of various ages. In a nutshell, Thaddeus is jealous and resentful of his baby sister until he discovers something ominous about her, something with the potential to DESTROY THE EARTH!...maybe. Fans of Gene Yang will enjoy this one, as will readers with short attention spans. I requested a review copy of this one from the publisher, First Second.

Buy Prime Baby from an independent bookstore near you! 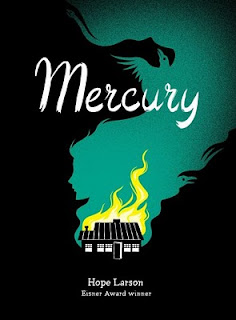 I was pleased to see that Hope Larson has a new graphic novel—I think she's one of the most distinctive comics authors working right now, particularly in terms of visual style. Mercury does not disappoint, visually or otherwise. Parallel coming-of-age stories in the past and the present link two distant generations of a family. In the present, we learn that Tara, a modern-day teenager, is living with her aunt and uncle after a fire destroyed their old family home. However, she's strangely drawn to the old place which, a few generations in the past, was home to her ancestress (love that word!) Josey. Josey's tale is rich with historical detail about Nova Scotia, where both stories are set, and shows how she came to fall in love with a mysterious and roguish prospector named Asa.

There are hints of the supernatural tastefully woven in to give the entire book a very dreamlike and contemplative quality. The artwork, as always, is nicely done; simple black and white are used to full effect and changes in the background color of the page subtly cue the changes between past and present. Another enjoyable and unique read from Larson. For a nicely written and informative review from Guys Lit Wire's Jesse Karp, check out the Booklist starred review reprinted on Amazon. I borrowed this book from the Stanislaus County Library.

Buy Mercury from an independent bookstore near you! 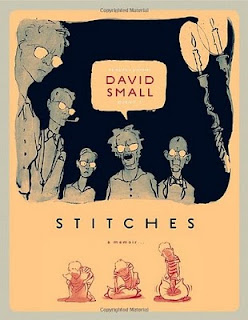 Last but not least, I read a book that would probably be best suited for older YA and adult readers: a graphic memoir called Stitches by David Small. Stitches was full of grim and disturbing irony, a tale of the lies told to children and their later ramifications, and the things left unsaid in families, things that simmer under the surface until something gives.

In his childhood, David underwent a throat operation that resulted in the severing of a vocal chord, leaving him without the ability to speak for quite a while. His father, a doctor, withheld the truth of his diagnosis—throat cancer--and his mother was too emotionally withdrawn and cold, lost in her own troubles, to reach out to him. The artwork heightens the feeling of distance between narrator and adults, with many of the adults depicted as looming, grim figures whose eyes are hidden and unreadable behind opaque glasses. As I mentioned in my brief review on Goodreads, what happened to the narrator in his boyhood is truly appalling, and it's hard to find redeeming qualities in the adult figures. However, there is redemption of a sort at the end of the story, hard won on the part of the author. I borrowed this book from the Stanislaus County Library.

the mercury cover is very interesting!

I have wanted to read Prime Baby ever since I learned:

I'll read pretty much whatever he writes.

And besides: we all know babies are nefarious creatures bent on taking over the world; it was just about time someone said it out loud.

Prime Baby is wonderful; I even managed to read it aloud to my fourth graders.

Regarding the New York Times Funny Pages -- that was, sadly, a limited time thing in the Sunday Magazine. Wish they'd kept it up, but it is long gone.

Oh, boo about the Funny Pages! That's too bad. It would have been great exposure for comics artists.