May Graphic Novels Roundup, Part One: Resistance and City of Spies

Firstly, good luck to all of those participating in MotherReader's 48-Hour Book Challenge! With houseguests staying this weekend, I knew I didn't have a hope of taking part, but one of these years.... Anyway, instead, I'm getting caught up on my reviews, and popping my head up finally after spending a couple of weeks hiding in obscurity, scribbling away at freelance articles and whatnot.

May was a good month for graphic novels—I managed to read five, all of them worth reporting on here. In part one of the roundup (check back soon for part two!), I wanted to juxtapose two different graphic novel takes on World War II, both suitable for younger audiences (middle-grade and up, or mature elementary-school readers). The seminal work Maus by Art Spiegelman certainly paved the way for future graphic novels on the subject, but it is definitely for more mature readers. Two recent releases from First Second give readers who aren't quite ready for Maus a serious look and a lighter look at life during the Second World War. I received both of these books as review copies from First Second. 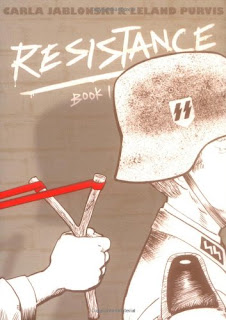 The more serious approach is taken by Resistance: Book 1 by Carla Jablonski and Leland Purvis. Paul Tessier and his sister Marie are coping with life in occupied France—and their life is complicated further when they decide to help hide their Jewish friend Henri from the Germans. Paul's sketches are a nice touch, and the story itself shows the impossibility of trying to live an ordinary life at a time when families and communities were being torn apart and turned against one another. There's a lot of tension and suspense, as well as action, which helps balance out the fact that the book has a sort of educational ring to it. I didn't love the artwork—some characters were hard to tell apart—but the interactions were clear and the colorist did a really nice job setting a time-appropriate tone. A good one for putting an individual face on the events of the war. I could easily see this one used in classrooms.

Buy Resistance: Book 1 from an independent bookstore near you! 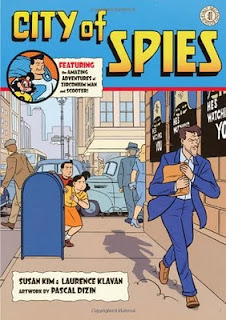 City of Spies by Susan Kim, Laurence Klavan and Pascal Dizin takes place during the same time period, but is completely different in tone, setting and purpose. In 1942, ten-year-old Evelyn comes to New York City to live with her artistic Aunt Lia for the summer while her jet-setting father gets hitched to yet another new wife. Evelyn is of German Jewish descent, but she's a wholly American girl who loves to draw comics in her spare time—sadly poignant comics in which a dashing superhero named Zirconium Man (who strongly resembles her father) and his valiant sidekick Scooter (who resembles Evelyn) save the world from monsters and spies. When Evelyn makes friends with Tony, an adventurous and equally imaginative boy in her building, they get a little carried away looking for real-life German spies. The more serious family subplot nicely counterbalances the more madcap spy-chasing action, and the artwork is strongly reminiscent of Little Orphan Annie/Little Lulu and other comics that I associate with the time period. And Evelyn's own comics are rendered in full old-style superhero-comic fashion, complete with brash primary colors and Ben-Day dot patterns. A very fun read that harkens back to, and honors, an earlier and more traditional comics feel.

i really liked CITY OF SPIES and wouldn't mind seeing this grow into a series a la tintin.

Yes--it seemed to be left open for a series. And Tintin is definitely one of the classic comics that this reminded me of--how could I forget!