Book Blurbs of June, Part I: Harmonic Feedback and Nothing But Ghosts

Before I get into the blurbs, I just want to say that Finding Wonderland is going to represent at ALA this year, by which I mean Tanita is going and I'm envious but glad. Have fun this weekend, everyone! 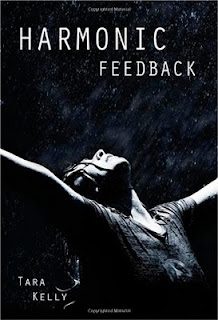 If you've ever felt awkward around other people, if you've ever felt shy or detached or even just a little different, you'll really feel for Drea in Tara Kelly's debut novel Harmonic Feedback. Though Drea has been diagnosed with ADHD and "a touch of Asperger's," she's eminently relatable and, in some ways, the most normal person in her family. She's intelligent and musically gifted, but has trouble connecting with others...or so she's always been told.

The brilliant part about this book is that it leaves it up to the reader to decide how much of Drea's "issues" are truly innate and how much is a perfectly reasonable reaction to difficult circumstances and an unusual upbringing. After all, who's going to find it easy to connect with people when you move to a new town every year or two? Nevertheless, now that Drea and her mother have settled in Bellingham, she acquires a couple of new friends almost despite herself, despite her defenses. Of course, letting her defenses down opens her up to new hurts as well as rewards. I really related to Drea—I don't have Asperger's or ADHD, but I think just about every writer knows what it's like to feel like you're an observer, like you're on the outside looking in.

I received a review copy of this book from literaticat. (Thank you!) Buy Harmonic Feedback from an independent bookstore near you! 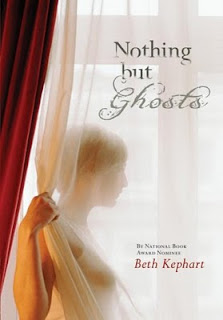 Every one of Beth Kephart's books seems to have a quiet thoughtful strength about it, and more than one of her protagonists has the driving internal need to discover something about themselves or about someone else—often both. Perhaps that's how they derive their inner strength—through discovery. Nothing But Ghosts finally made itself available at my library, and it fits nicely in with her other titles. Like her other books, it's tightly, simply, but vividly written.

Katie is still learning to deal with her mother's death from cancer the preceding winter, but she and her dad have fallen into a kind of routine by the following summer. While her dad restores paintings in his workshed and cooks up a storm for dinner, part of Katie's routine is her summer job gardening at the massive estate of the mysterious Miss Martine. In the process of working there, she discovers intriguing secrets about the owner of the place, and she also discovers friendship and love after having closed herself down for months after her mother's death. Where the everyday and the unusual interweave and lead one another along—that's the stuff of life, and this book is in many ways about the small moments of life, the ones that are easy to miss if you aren't careful. As always, I'm in awe.

I got this book at the Stanislaus County Library. Buy this book from an independent bookstore near you!
Posted by Sarah Stevenson at 11:13 PM
Labels: AF, Problem Novels, Realistic Fiction, Reviews

Yay for you, Sarah! Many congraulations!

Woohoo! I just pre-ordered The Latte Rebellion. It sounds great.

Yay! Thanks, you guys. :) I hope it doesn't disappoint. (I'm starting to have fears that people will read it and think, THAT'S what's going on in her head??)