Aquafortis and I are always interested in giving props to writers from our neck of the woods. Ying Chang Compenstine, who we interviewed in 2008 about her YA novel, Revolution is Not A Dinner Party (which won 19 literary awards, woot!), is a Bay Area author who has a new picture book out called Dumpling Boy, illustrated by James Yamasaki. 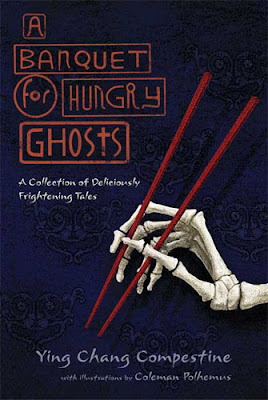 Ying also celebrates the release this month of a collection of Chinese festival-themed ghost stories for older readers, called A Banquet for Hungry Ghosts. Dumpling Boy has a yummy looking simplified recipe for dumplings (Boy-free, the author assures us) which kids can make themselves.

The Hungry Ghost Festival is a festival which occurs on the seventh month in the lunar calendar; apparently at that time, the gates of the underworld open, and unleash the ghosts onto the world for a month so that they can eat. Many Asian and Southeast Asian families leave offerings of food near graves and shrines. If that's not a pre-made setting for a fully creepy collection of stories, I don't know what is...!

Ying is an author who knows the way to her readers' hearts. For the release of her hungry ghost book, she hosted a FOURTEEN COURSE Chinese banquet for her guests. And you just know they had dumplings.

Why am I suddenly starving?

You can find Dumpling Boy or A Banquet for Hungry Ghosts at an independent bookstore near you!
Posted by tanita✿davis at 2:18 AM
Labels: Fantasy/Sci-Fi, Middle Grade, Reviews, Short Story Collection

I hope you're working on a vegetarian recipe, because I'd love to try it! We had dumplings in Beijing that were out of this world. We three vegetarians had our own table and got to try all kinds of fun things the meat lovers missed out on. Funny though, most of the wait staff couldn't understand what we meant by "no meat," so they brought us chicken and duck instead!

Eeeee! Dumplings! Thanks so much for tipping me off to these books. I wanna make that recipe :9.

Tricia: You know I'm on it.
Jama: HAH! I thought of you IMMEDIATELY when I heard about Ying's new picture book. She has another one called The Runaway Rice Cake.

Ooh, dumplings...like Tricia said, Beijing seems to be the home of dumplings. When we were there we went to a place called the Thousand Dumpling Palace and just had tons of different kinds. Yum...

The book of scary stories looks like just what I need. I loved The Revolution is not a Dinner Party!

The cover is just gorgeous -- chopsticks, bones -- it works.