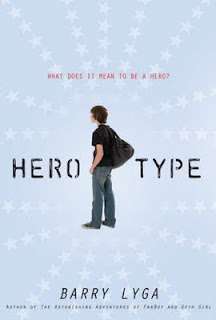 Although I don't think Barry Lyga's Hero Type has been challenged, I wouldn't be surprised. There's so much in here about freedom of expression, about what it means to be a patriot and what it means to really care about your country—caring enough to do more than just thoughtlessly go through the accepted motions of patriotism.

"Kevin, let's cut to the chase—why don't you want to say the Pledge?"

"But everyone does. Ever since we were kids. And no one questions it. No one asks why. We just keep doing it, and if we don't, we get crucified. Like not putting ribbons on our cars."

It's a book about what it means to be a hero, yes, and the different definitions people have of that deceptively simple and brief four-letter word; but on an even broader level it's about ideals and idealism. We all have our ideals that we want to or are expected to live up to, but for the fact that we're also all too human, and more or less imperfect. Kevin Ross, aka Kross—the book's narrator—saved a girl at school from assault by a wanted criminal, but he was just in the right place at the right time, and nobody knows his true reason for being there. If they did, they might not think he was such a hero.

But for now, he's an exemplar for his small, relatively conservative town (the same town of Brookdale where Lyga's other books take place)...that is, until a misunderstanding over some "support the troops" ribbon magnets escalates into a town-wide hullaballoo over free speech and patriotism. Kross, who hangs out with a group of sort-of misfits self-dubbed the Council of Fools, is caught in the middle trying to defend his own opinions from attack, and his friends seem to be equal parts help and hindrance. In the end, what it means to be an ideal hero, an ideal brother, an ideal friend or patriot, really isn't set in stone but is a bit more elusive, perhaps more of a journey or a learning process.

It's possible that some readers might find Kross's rather lengthy moments of realization to be a bit "teach-y" in the sense that they give the book the appearance of having a very clear agenda (which I suppose it does have)--but Kross is a pretty introspective narrator, so it didn't bother me to see his thought process in action. To me, this was another winner from Lyga, who's 3 for 3 with this reviewer.
Posted by Sarah Stevenson at 2:52 PM
Labels: AF, Guy Appeal, Realistic Fiction, Reviews