Life on Earth, Life in Space

It seems like it's a reading extravaganza around here lately, between Tanita and me. On the average, I would generally insist that Tanita reads much more quickly than I do, but I also have a tendency to (sort of counter-intuitively) devour books with a vengeance when I have a lot of other things going on—I'll work very intensely for a while, then I'll need a brain break and I'll sit with coffee and a book for longer than is strictly necessary. Anyway, here are the last couple of novels that I enjoyed. 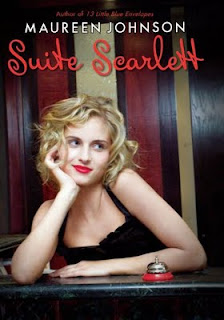 Firstly, I finally got around to reading Suite Scarlett by Maureen Johnson. I think that every book I read by her I've enjoyed just a bit more than the last. I liked 13 Little Blue Envelopes a lot, in particular, but also felt like certain aspects weren't quite "there" in terms of the execution, though I adored the overall premise. I did NOT feel that way about Suite Scarlett, and in fact, I was quite pleased with both the premise (also quirky and intriguing—fifteen-year-old Scarlett and her siblings are growing up in a shabby-chic New York hotel) and the overall reading experience.

Scarlett is the second-youngest of four, and on her fifteenth birthday (like her older brother Spencer and older sister Lola) she receives the key to one of the hotel's suites—and assumes responsibility for taking care of its guests. But that summer's guest in her suite—the flamboyant Mrs. Amberson—ends up being quite a bit more than Scarlett bargained for, in good ways and not-so-good ways. Meanwhile, Scarlett's dealing with family drama and trying to negotiate a tricky first love. This story has multiple layers, all of them interesting, and each character is unique and vivid and really comes alive. A wonderfully unconventional story of coming into one's own independence in a close-knit family full of strong personalities. 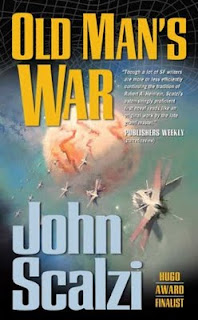 Old Man's War by John Scalzi isn't a YA novel, but it's a good sci-fi space war adventure that will definitely appeal to older YA readers. If you enjoy writers like John Varley or books like Anne McCaffrey's Sassinak--both of which I read as a teenager—then this might be a good series to try out. This first book in the series is narrated by John Perry, who's 75 years old and just about to embark on his new life and new career—as an army grunt in the Colonial Defense Forces. It's some unspecified time in the future, far enough that humanity has entered space, but near enough that life on earth continues in a pretty similar manner to what we're used to. Except that, once you get old enough, it's an option to sign up to spend the last years of your life in the CDF, which is reputed to have the technology to make you more youthful again, though nobody really knows what you do once you get there, because nobody ever returns from the colonies. But John Perry's wife has died, and he's got nothing else he wants to do, so he's about to find out what it's all about.

His narrative voice is sharply witty, and as a character he's honorable but down-to-earth, which makes it easy to get absorbed in his story no matter how weird it gets. There's also a lot here about what it means to be human, on a physical as well as a philosophical level. It reminds me of (and here the geek comes out) Star Trek: The Next Generation at its best, with alien races competing for domination of the universe forming an action-packed backdrop for the character issues. "Hard SF" fans should definitely check it out.
Posted by Sarah Stevenson at 2:43 PM
Labels: Adventure, AF, Crossover, Fantasy/Sci-Fi, Guy Appeal, Realistic Fiction, Reviews, Romance

I've been reading TONS, but the thing is, I'm trying desperately to become a bit better at, oh, actually, WRITING UP MY BOOKS. It's getting ridiculous, the stacks that I can't let out of my sight because I haven't written anything about them yet.

But I'm getting better. Hopefully.

I listened to Suite Scarlett a couple months ago, and it made me think I have to read more Maureen Johnson. I also particularly enjoyed her contribution to that Let It Snow book she did with John Green and Lauren Myracle.

Aha! It must have been here that I learned about Old Man's War. It came up in my library holds queue, and I read it, enjoyed it, but wondered who had recommended it to me.