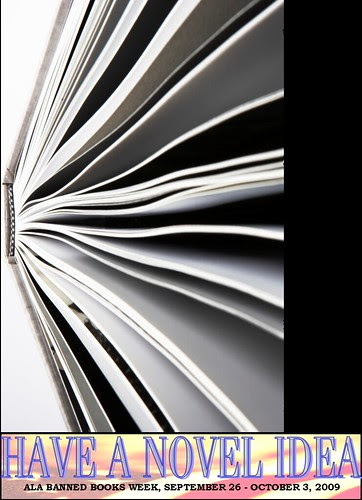 Twilight is now being challenged, according to The School Library Journal, in Sydney, Australia.

Dear Conservative Sydney Schools (Added for Judith's sake):
Would you believe that some of us Yanks don't like those books either?
(To which the Universe says, "So?")

We may not like it, but we would slap down our library cards to give anyone a chance to read it. We understand not wanting the younger kids to read it, but if their parents are okay with it, you're going to have to let that go. As for restricting it because you're afraid the younger students won't know it's fictional? Have you seen any sparkly vampires lately? If so, you might be in the wrong line of work.

Let it go, Sydney schools. Just grit your teeth and enjoy the sparklies, and try not to trip over anything or mind if someone is looming over you, watching you sleep. It's all in good fun.

HAPPY BANNED BOOK WEEK!
Posted by tanita✿davis at 2:58 AM

I hear you. They don't have to stock it in the children's section, but neither should they pull it off the shelves.

Whoa ... strange thing just happened. I think I blacked out and had a weird dream, where your post said that Sydney was challenging Twilight. As in the sparkly, sexless vampire book.

Must be b/c of the whole abusive, creepy relationship aspect, b/c otherwise, I've got nothin'.

They've got nothin' either -- and the Daily Telegraph article described the book as "racy." As in, "We didn't read this book, and once again the press is operating on hearsay."

Love it when that happens.

What are they smoking?

A handful of conservative primary schools does not a city make.

Sydney is not banning the books. Some schools are. I think you get the difference...

We're very glad to hear it, too! Thanks for chiming in, Judith. Hope you stop by again.

Dear Judith, Mea culpa! I've made changes just for you. I understand that Sydney is a very nice place. Thanks for stopping by.