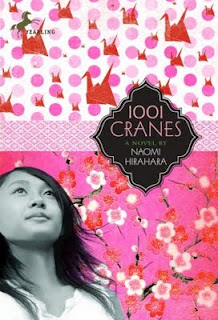 1001 Cranes by Naomi Hirahara is one I had on my library request list recently, a middle-grade/younger YA story that focuses on themes of family--both growing closer to and apart from, on growing up Japanese-American in California, and on opening oneself up to friendship in unexpected places. Twelve-year-old Angie was named by her radical hippie parents after Angela Davis, but those same parents aren't getting along so well right now, and so they're leaving Angie with her Gramps, Grandma Michi, and Aunt Janet down in Gardena for the summer.

Angie's always been told not to monku, or complain, but spending a summer helping her grandmother with folding paper crane displays for special events isn't her idea of a fun summer, especially when she can't meet her grandmother's exacting standards and feels like she can't manage to say or do anything right--even the people she tries to make friends with don't seem to be good enough. This isn't an easy novel to describe in just a few words, but fundamentally, the story is about crossing bridges, about learning to reach out to people and truly try to understand them--whether they be family, friends, or even relative strangers--and know that the surface isn't the whole story. 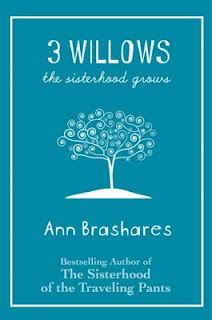 Ama's going away to wilderness camp, appalled and angry that she didn't get chosen for the academic program she wanted, uncomfortable with the other teenagers there, and convinced there was some kind of mistake. Jo is going with her mother to her parents' beach house to work a summer job busing tables at a boardwalk restaurant, but when she gets involved with a cute older boy, the situation starts to get out of hand. Polly, meanwhile, feels lonely and abandoned. She decides to take matters into her own hands and make some changes in her life, changes that will make her just as exciting and grown-up as everyone else. Brashares has a knack for creating distinctive and memorable characters, and I got exactly what I wanted out of this book--three intertwining stories not only of friendship but of finding one's personal inner strength despite what may seem like long odds. I guess I'm a sucker for a good strength-through-adversity story. 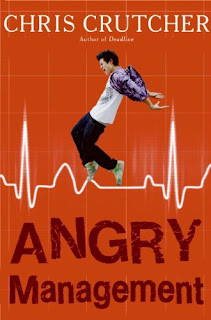 Speaking of three stories, Angry Management by Chris Crutcher is literally that--three stories, all involving characters from his other novels. They're loosely connected by a frame story in which all the characters have been placed in an anger management group, but I didn't really need that part, to be honest (and actually, it seemed a little goofy to me, I'm sorry to say). It was the short stories--or novellas, maybe--themselves that were the main attraction.

I actually don't know what to say about these, they're so good. I don't want to risk ruining them by summarizing, but I will say that they deal with not just anger but every other gripping theme under the sun--reluctant friendships that teach you something unexpected, learning to survive abuse and abandonment, facing down injustice even in your own family, the horrific ramifications of small-mindedness and prejudice. Race, gender, sexuality--Crutcher doesn't shy away from any of it. All I can say is, read it.
Posted by Sarah Stevenson at 8:59 AM
Labels: AF, Girls Fiction, Guy Appeal, Multicultural Fiction, Realistic Fiction, Reviews, Short Story Collection

Oooh. I am salivating. All three are up my alley.

I have to admit that I wouldn't be racing to read anything from the Walking Jeans series, but hey -- if you say the tree sequel is good, then I'll buy it.

The best book on anger I ever read was with a character named Owen -- a Sarah Dessen novel (three books back, I think), can't remember the title! But I look forward to this Crutcher.

I'll tell you, 3 Willows was fine light summer reading. There were very minor tie-ins to the previous pants books but it's essentially a new set of characters and stories, which is good. It also felt like there was less sentimentality because of the fact that the book starts with the three characters NOT being close. That helped for me--I'm not a fan of sentimentality.

Oh, and I totally want to invent an origami anger tree now.

love your description of 1001 Cranes. Thanks so much for highlighting it. And Chris Crutcher is amazing - I'm curious which characters come through in this book.