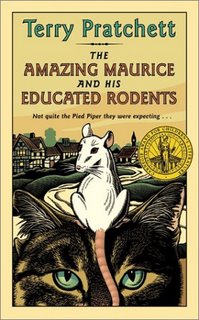 YA Fiction has rules, and one of them is that the protagonist in the story must be a young person, or the story has to have at least one central character who is between the ages of eleven to, oh, say, eighteen. If this weren't the case, many more of Terry Pratchett's books would be considered YA Fiction. There is a certain wonderful wryness about them, a certain skewed perspective which causes young and old, who 'get' his many sly jokes, to spew their coffee (or milk) right out of their noses most of the time. Funny? You bet. Seriously thought provoking? Entirely.

Winner of the 2001 Carnegie Medal, an ALA Best Book for Young Adults and a New York Public Library Book for the Teen Age, 2002, and more, The Amazing Maurice and His Educated Rodents is a madly tilted story of the Pied Piper of Hamelin, only this time distressingly reset in... the Discworld. (A quick run-up to the Discworld would be that it is a world... that is disc-shaped. And riding on the back of four elephants, who are, in turn, riding on the back of a giagantic tortoise, swimming through the stars. Well, you asked.) Strange things happen on the Discworld, including talking cats, which is what the aforementioned Maurice happens to be: a cat. He is accompanied by a rather dim boy, and a host of rats. They also talk... It's the perfect setup for a scam.

Maurice has been running the scam of -- "Ooh, the town is overrun with rats, what shall we do, what shall we do?" and "Call the Piper!" and then the Piper leads the rats out of town with a sort of ceaseless tootling on his little pipe -- for quite some time. And they've run out of towns closer to home where they're not in trouble with the law, so they're moving on. They've found a town called Bad Blintz, and everybody there hates rats. There are traps in every cellar. But something else is going on in Bad Blintz. Something worse than just non-talking rats... There are voices that get into people's heads. There is Big Evil at work. And it's making everyone kind of crazy...

Pratchett is witty, wry and snarky and his prose is quick. The jokes are quicker, so beware the laugh-out-loudness of this novel and don't slip it into someplace you're supposed to be reading quietly - it won't work. There's something weighty and thought-provoking in Pratchett's satire, teaching some big truths quietly; and it won't be hard for YA readers to find and identify with the hypocrisy of humanity and the silliness of the world at large that pretty much leaps off the pages. But don't worry -- not too much of that kind of thing. Mostly, Maurice & Co. are just a lot of fun.
Posted by tanita✿davis at 4:57 PM
Labels: Reviews