When you imagine yourself surrounded by monsters in your worst nightmares, are you armed with a frying pan? The Wee Free Men heroine Tiffany Aching is. She's ten years old, and very sure of the world. Mostly, she's very sure that people don't listen, are basically stupid, and that there's not much of a life for girls in the rural village where she lives, unless she wants to be a mother. Oh, and she also knows that her little brother will do anything for candy.

Tiffany has the world pretty well figured out until she sees Something Nasty kidnap her soggy and annoying little brother Wentworth. Trouble is, Mam told her to watch over her brother. Tiffany, a witch-to-be, knows her duty. She sets out to find him. 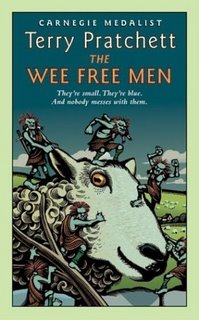 There's trouble in the Chalk high country where Tiffany lives. There's a hole in the world, into which all the monsters who had been banished by reassuring things like modern times and sanity, are reappearing. The unofficial village witch, Miss Tick, is aging and out of town, so there is no one to stop them... no one, but Tiffany. And on her side, are the little blue men.

Nac Mac Feegle, they're called, a sheep-stealing, bare-knuckled, hard-drinking, fierce lot of Highlander Pictsies -- NOT pixies, if you don't want a head butt to the bridge of your nose. Nothing stardusted and spry or milk drinking and cute about this lot. They're bright blue, six inches tall and wear little kilts, but don't let that worry you. They're out to bash some heads and preserve their world. Fortunately, they're part of the Good Guys.

In this fractured fairytale, where myth and folklore collide, fairies aren't sweet bewinged things bringing happiness, the hound of hell with razor teeth and burning eyes is called a grimhound, and the Queen of Elves is an absolute horror. There's nothing good out of a fairytale, and it's up to those with common sense to bring the world back into order.
Posted by tanita✿davis at 5:44 PM
Labels: Reviews