The Genius of Terry Pratchett: Of Invisible Hats

With a start like the one she had with the little blue men, heroine Tiffany Aching sets out on the road to being a witch thinking that life is going to be a lot of the stern work of Setting Things Right in the World. It is time to leave the Chalk, the highland world where the very bones of the earth are a beloved and familiar history beneath her feet, but where no one can teach her what she needs to know. Or so Tiffany thinks.

In A Hat Full of Sky Tiff is apprenticed to the uniquely twinned Miss Level, befriended (sort of), by the other apprentice witches, there can't help but in spite of herself, she expects excitement around every corner. But, there's not so much to be had. Tiffany ends up kind of being a servant. She beat the Queen of the Fairies. She's a witch in training! She's treated like... a servant, helping take care of stupid people! That can't be right. Where's the respect? And there are so many stupid people in the world who need help...

It's only to be expected that young Tiffany gets sick of her world as it is. Even the Nac Mac Feegle, who are charged with watching over "the young hag" can't stop what's stalking her. When Something Wicked This Way Comes, Tiffany's pride leaves her open to its invasion. And nobody can save her, not Esme Weatherwax, the greatest witch in the Discworld, not Miss Level, not the Wee Free Men. This time, Tiffany has to save herself. 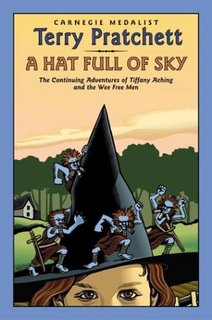 The novels of Terry Pratchett all share one commonality in that they delve into deeper philosophical issues ...stealthily. The heroes and heroines are not perfect by any means, yet the Bad Child Gets Punished motif is not at work here. Pratchett reveals to YA readers the silliness of some of the way things are, but provokes readers to closer examinations about their beliefs on the nature of ethical behavior, popular myths and religious beliefs, and widely-held beliefs about science and the nature of the universe. He injects a strong shot of doubt into the unexamined life, and kicks contempt prior to investigation right out the door. Readers will want to read his work again and again, just to think through the thoughts behind the stories. Getting readers to think of and learn what is really true is of real importance to Pratchett, and it shows in all of his novels.

Pratchett has quite a few reoccuring characters, which endear his readers to him, and we can expect more from Tiffany, I have no doubt.
Posted by tanita✿davis at 5:48 PM
Labels: Reviews