It's time for another episode of Wicked Cool Overlooked Books, brought to you by the genius that is Colleen of Chasing Ray.

W.C.O.B. takes place the first Monday of the month, and normally I don't participate because... well, I'm not sure I know from "wicked cool," really, but "overlooked," I discover all the time, so I thought I'd give it a go this month.

It's super easy to overlook good fantasy, because the genre is notoriously... prolific. Tor is the unheralded king of flooding the market with what can only be described at times as the veriest pulp fiction -- and because of this largess, people occasionally assume that all fantasy novels are poorly scripted, badly written, over-dramatic and filled with stock characters: shining white mind-speaking horses, blue eyed ingénues, lusty heroes, evil warlocks and vague, dusty wizards. While there are legions of damsels-in-distress and riding to the rescue types of novels that are enjoyably escapist, not all of them present female characters as entirely lacking. For instance, 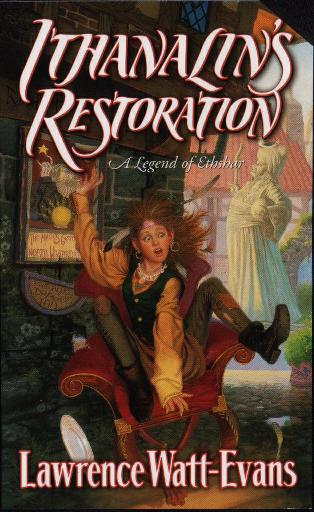 Lawrence Watt Evans' Ithanalin's Restoration, one in a series of novels set in Ethshar, is the story of 17-year-old Kilisha, a wizard's apprentice who is bored out of her mind. The wizard Ithanalin is horribly slow to teach her anything of any use, and Kilisha wonders if she hasn't made a mistake in apprenticing herself to him with his grubby robes, his wife and kids and his safe, sleepy pace. Everything changes, however, when the wizard makes a minor mistake in an animation spell that has major repercussions. Ithanalin's body is frozen in stasis, and his spirit flees... into a few inanimate household objects, Kilisha discovers later. Suddenly she's in charge of fixing... everything. The wizard's wife, Yana, and their three children are counting on her.

Funny, frothy, and a little screwball, this is a simple story that encompasses one person's growth and fast-forward growing up in a charming style. Evans' treatment of his female characters is always positive - even as he shows their attitudes for what they are. His work is always fun for me to read.

(And, if you read the novel and account for all of the... furniture in it, the title begins to make a horrible kind of sense: Ethan Allen's restoration. And then you groan and realize what an awful and twisted mind the author has! Argh!)

My second W.C.O.B. is the second-to-last solo book that fantasy powerhouse Andre Norton published before she died. (The one second book in this duet was co-authored.) Cinderella, Snow White and Sleeping Beauty's stories all seem to collide and combine into an intriguing blend in Scent of Magic.

Willadene is a talented orphan whose life at her Aunt Jacoba's Wanderers Inn is a misery. She is ill-treated as a scullery maid, her skill at aromatics is offended (as the kitchen -- and the Inn -- reek), and not only that, her Aunt has decided to marry her off against her will to someone foul. Willadene finds the way to escape through apprenticing herself to Halwice, the herbmistress of Kronengred, after Willadene's keen sense of smell saves the woman from a magical trap - but Halwice's sponsorship also puts Willadene into the path of political intrigue and another kind of danger.

Like Ithanalin's Restoration, this story slides comfortably into the known, with a Ducal Court, evil aunts, worldly spies, a dashing prince and an innocent princess, but it also has that touch of Norton's genius with enigma, including the character of Ssssaaa, who knows... everything somehow.

Every once in awhile it's a lot of fun to go back and rediscover some of the fantasy classics. If you've never heard of either of these two, I wish you joy of them, a tall glass of something cool, and a suitably soft hammock. Cheers!
Posted by tanita✿davis at 2:16 PM
Labels: Reviews, Wicked Cool Overlooked Books

You had me until the Ethan Allen thing. I cannot abide a bad pun.

But seriously, to my shame, I have never read Andre Norton and you've inspired me to do so. Thanks for the recs!

Cool! I used to love Andre Norton's Witch World series when I was in high school, and I remember enjoying her Star K'aats (sp?) books when I was a kid.

Actually, Eish, it's not so bad. Honestly. I read the book YEARS AGO and just caught on to the pun... today. So, he doesn't go all Piers Anthony on you and give you puns all along. Unless I am incredibly thick and simply didn't catch them... It's an excellent novel. Read!

Quite. The title is about the only pun I can recall, and I've read the entire series. You can't blame that on the author - more like the publisher (Tor), I'm sure.

I particularly like that the author has kept on writing this series as an online serial / self-published series, because his publisher canceled it. The author is committed to the series and its characters, and it truly shows.

They're a difficult series to track down - I ended up having to purchase several from Powels, as libraries don't tend to stock self-published works. But they were quite worth the effort, as he's deviated from the standard, stock characters and is more into exploring what would really in a world of magic. He's asking the "what if" questions that the generic fantasy work doesn't address.