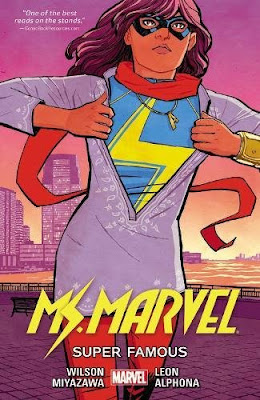 Synopsis: The level of fun in this teen-superhero series continues to be high (see my previous reviews of Vol. 1 and Vol. 2 for some backstory). Kamala Khan is relatable and diverse, a girl who has concerns about friend and school and family and culture and struggles to balance them with her superhero lifestyle. There's lots of humor here, too, as Kamala makes mistakes like a teenager and they somehow compound themselves into total chaos. Here's the Amazon synopsis:


She's your new favorite. She's everyone's new favorite. And now she's joining the big leagues. Look out world, Kamala Khan is officially an Avenger! But will being one of Earth's Mightiest Heroes be everything she imagined? Or is life as a celebrity harder than she thought? But while saving the world is important, Jersey City still needs its protector too. A development company that co-opted Ms. Marvel's face for its project might well have more in mind for gentrification than just real estate. Can Kamala take down the evil suits destroying her home without ruining her personal life? Speaking of which, who exactly is that with Bruno? Get back on board and cling on, Kamala Korps, the ride is about to get wilder than ever!

Observations: Bonus points for diversity here and for depicting a Pakistani-American Muslim family in positive terms (despite a minor linguistic quibble or two on my part) and for showing the diversity of Muslims as well. In this volume, we see Kamala's brother engaged to an African-American Muslim woman, and we see variation WITHIN a culture as well as variation between cultures. Besides this, I was impressed by the variety of themes covered here in a superhero comic—themes relevant to teen life and growing up, like how to be there for, and be true to, both self and family. It was also a fun addition to see Kamala having joined the Avengers, and struggling with yet another new role to play in her already-hectic life.

Oddly enough, perhaps, I'm impressed with the colorist on this series—the use of color adds a lot of atmosphere and helps focus attention on the characters and the action. As always, it's fun and well-drawn, and just a bit cartoony, appropriate to a superhero with goofy stretching and shrinking powers and a tendency to get into outlandish predicaments.

Conclusion: If you enjoyed the previous installments, you'll want to continue reading this series. There are so many good reasons to spread understanding and acceptance of Islam and Muslim Americans, especially now, and providing young Muslim girls (and young girls in general) with an all-American superhero they can identify with is an admirable accomplishment.

I received my copy of this book courtesy of my library. You can find MS. MARVEL VOL. 5: SUPER FAMOUS by G. Willow Wilson, Leon Alphona, and Takeshi Miyazawa at an online e-tailer, or at a real life, independent bookstore near you!
Posted by Sarah Stevenson at 11:29 AM
Labels: Adventure, AF, Cybils, Diversity, Fantasy/Sci-Fi, Graphic Novels, Multicultural Fiction, Reviews