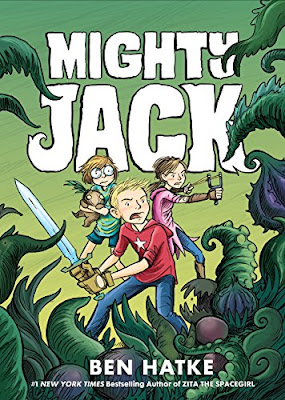 Synopsis: I was a big fan of Ben Hatke's previous Cybils winner Zita the Spacegirl (reviewed here), and Mighty Jack--a Cybils finalist this year for Elementary/Middle Grade graphic novels--was a very fun reimagining of the Jack and the Beanstalk story. It's got lots of action and adventure, with imaginative killer plants and monsters and a dragon, and a strong female sidekick for the hero. It also definitely leaves things open-ended and ready for Book 2, so don't fret that you're left hanging at the end! There will be more to this story...

Observations: I like how this story depicts the idea of Jack and his family being poor in a modern setting rather than a fairytale one. His mother is working two jobs, and Jack is tasked with caring for a sister with challenges. He buys the magic seeds at a flea market. It's a very creative and intriguing reinvention of a familiar story. I like that there's a homeschooled friend, too—at heart these are all characters whose stories aren't shown as often, placed into the context of a story we all know. I sort of wish there wasn't such an abrupt ending to Book 1, though--as mentioned above, readers are kind of left hanging. That always vexes me a little when I don't have the sequel immediately at hand.

Art-wise, I thought this one was wonderful! The pacing of the visuals vs. the dialogue was, in my opinion, perfect, and lends a lot to the storytelling style. The book was chock full of appealing characters and monsters, and I liked the scratchy-pen quality of the illustrations.

Conclusion: I honestly think you could hand this to any kid, especially fairy-tale fans--the balance of humor, fantasy, and adventure is perfect, and it isn't too scary for younger readers.

I received my copy of this book courtesy of the publisher. You can find MIGHTY JACK by Ben Hatke at an online e-tailer, or at a real life, independent bookstore near you!
Posted by Sarah Stevenson at 11:17 AM
Labels: Adventure, AF, Cybils, Fantasy/Sci-Fi, Graphic Novels, Humor, Middle Grade, Reviews