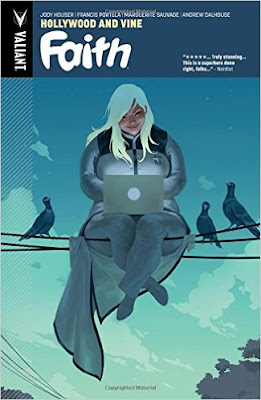 Synopsis: This was another one of our finalists for this year's Cybils Awards in YA Graphic Novels, and it features a body-image-positive, female, smart, butt-kicking superhero. I'm going to let the jacket copy speak for itself here, since I can't really improve on it!


Orphaned at a young age, Faith Herbert – a psionically gifted "psiot" discovered by the Harbinger Foundation - has always aspired to greatness. But now this once ordinary teenager is taking control of her destiny and becoming the hard-hitting hero she's always known she can be - complete with a mild-mannered secret identity, unsuspecting colleagues, and a day job as a reporter that routinely throws into her harms way! Well, at least she thought it would... When she's not typing up listicles about cat videos, Faith makes a secret transformation to patrol the night as the City of Angels' own leading superhero – the skysoaring Zephyr!

But flying solo is going to be tougher than she ever thought when Zephyr uncovers a deep-rooted alien conspiracy. Two-bit burglars and car thieves are one thing, but when the world needs a hero to stave off a full-blown extraterrestrial invasion, will Faith find herself in over her head...or ready for her biggest challenge yet?


Observations: One of my usual comments in this genre is that superhero comics aren't everyone's cup of tea, although this one brings forth a protagonist who is much more of an everywoman, and more broadly relatable as someone who doesn't have an impossible body type and is a recognizable fangirl. However, the character—though she is a younger adult—is not a teen character per se. Not that that has ever been a problem for YA readers who like superhero comics, but this one seemed a bit older YA/adult to me, so I'd add that on as a possible asterisk. 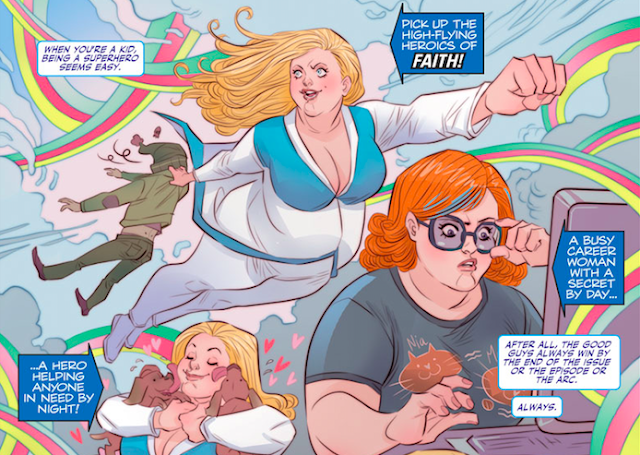 Kudos, though, to the authors of this comic for their everywoman, fangirl superhero and for having fun with tropes like the Clark Kent-journalist cover identity--Faith works for an entertainment news website by day, as a mild-mannered nerdy reporter. I also appreciated the fact that this superhero DOESN'T have an impossible, gravity-defying perfectly sculpted Learn-to-Draw-the-Marvel-Way body. At the same time, body image is also not an issue or even really a topic of conversation. (I don't know about the realism of that--our society is not known for being able to shut our mouths about other people's perceived imperfections--but far be it from me to criticize realism in a superhero comic.)

Visually speaking, this is pretty good stuff—very fitting to the traditions of superhero comics in terms of style and overall feel. Very solid, easy to tell what was happening for the most part, and while it wasn't really to my personal taste in terms of visuals, it was well done.

Conclusion: Definitely hand this one to young readers who like comics and/or the superhero genre. It's a fun read, and it's great to see more titles that are turning superheroes into something that any gender can enjoy.

I received my copy of this book courtesy of my library. You can find FAITH, VOL. 1: HOLLYWOOD AND VINE by Jody Houser, Francis Portela, and Marguerite Sauvage at an online e-tailer, or at a real life, independent bookstore near you!
Posted by Sarah Stevenson at 11:20 AM
Labels: AF, Cybils, Diversity, Fantasy/Sci-Fi, Graphic Novels, Humor, Reviews

This is the novel here that particularly intrigues me.

It was a very fun read. I wish there'd been more stuff like this in the comic store when I was growing up!