One of the things the kidlitosphere talked about a lot in the early days of the early 2000's was the preponderance of YA novels with ridiculously 1% families in them. Rare were the books where the kids had parents who worked blue-collar jobs, did shift work, or didn't go on to college, where the kids themselves didn't have the means to have their own cars or to pop on their traveling pants and hop a plane to Greece. Young adult literature, we realized, was normalizing a sort of White, Anglo, Cis, Het, "My Super Sweet Sixteen" lifestyle that very few people actually lived, and we wondered if authors and publishers shouldn't start looking more critically at the lack of inclusiveness in fiction for young adults.

That conversation started a chain of others, and change has been gradual; you now you can find novels in YA that aren't predominantly about the upper middle class. Generally, however, those characters are nonwhite -- so this novel (though the cover looks like it came from before 2000) featuring a hardscrabble, working-class white family with their relatable particular quirks and issues is a small and welcome surprise.

Synopsis: Small town Portland girls Amber and Crystal are the first in their families to graduate from high school. With a mother who has a gambling addiction and a stepdad who smokes pot and rarely gets off the couch, they know there's not always going to be food in the cupboard, and graduating wasn't always a sure thing, but they had a Plan. They were going to finish high school and move out, Crystal was going to get a full-time job at the mechanic shop where she worked, and Amber would take over at her aunt's tavern when she was twenty-one. They'd raise baby Natalie together, and make their life in Portland work.

That was a great plan -- and when it worked, it worked well. The school had daycare, their friend Han scouted out freebies for the baby from the paper, and even though sometimes Crystal had to type Amber's English papers, it was working. It stopped being a dream for both girls when a guidance counselor noticed Crystal's good grades, and asked why she'd not even considered going to college. It wasn't easy to think about moving away and doing something else -- she'd always been the flannel-wearing, grease-monkey sister with no social graces... but there was a college that taught restoration courses for old cars. She could actually open her own business, not just get a job. Suddenly Crystal isn't sure that the small dream she had is worthwhile anymore. But, if Amber won't go to Kansas with her for college, can she make it without her? 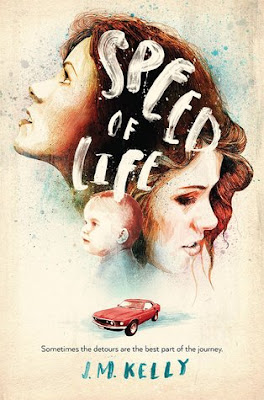 Observations: This novel contains a lot about reality - in a slice-of-life fashion that informs the reader even as it creates an interesting narrative. It's basically the story of a stupid, stupid choice, and the reverberations echoing through the lives of the girls as they take a detour from The Plan that has shaped their lives for the last several years. It's a detour - but it's also an adventure, and puts them both on a path to growth and change that they hadn't previously been capable of imagining.

I'm always pleased to see a novel featuring a baby born to a teen wherein the baby is not seen as being a catastrophe. Granted, high school pregnancy is very probably not a picnic by any means, but it's not the end of the world, because a teen's young, strong body can usually handle it just fine, and there's help and support in the form of WIC and high school daycare and other things to help teens finish school. Too few YA novels explore this, but I was pleased with how much subtle information this novel included. (YES! Car seats expire! Yes, if you feed a baby refried beans BAD THINGS HAPPEN.)

Another piece of reality the novel explores is that teachers often fail us and guidance counselors are NOT the answer to anyone's life's woes. The guidance counselor in this novel was clearly dealing with her own issues, and while she definitely gives Crystal a push in the right direction, she does no more than that. This reminds the reader that people can only give you what they have to give - that included Amber and Crystal's mother, their family members, and their teachers. Mostly, in life we get by on the grace of friends.

Conclusion: In real life, no one can save you... but you. There's no surprise manic pixie dream girl to provide your life direction and meaning; you have to choose to get up every day and put one foot in front of the other, in order to grab the life you want. While the novel wrapped up in a way that is a little tidy, this message comes clear. Though this isn't a "loud" book, or an "issue" book in most ways, it's a solidly positive book in that it gives two girls autonomy over their bodies, their minds, and their decisions -- and even allows for frankly STUPID decisions, while letting the reader understand that though sometimes we're stupid, life still goes on.


I received my copy of this book courtesy of the publisher. After October 11, 2016, you can find SPEED OF LIFE by J.M. Kelly at an online e-tailer, or at a real life, independent bookstore near you!