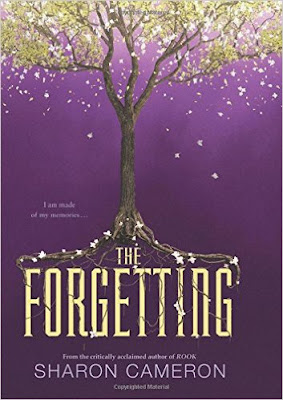 Synopsis: The "every X years something life-changing/terrible/wonderful happens" trope always reminds me of that Ray Bradbury short story "All Summer in a Day," which I read for school in maybe 6th or 7th grade and found incredibly traumatic. In that story, people live on a rain-soaked Venus where the sun only comes out for something like an hour every seven years. In Sharon Cameron's The Forgetting, every 12 years the city of Canaan descends into chaos as people prepare to lose their memories—all of them. Who they are, who their families are, things they've done.

That's why everyone carries around a book—the book of their lives, so they can remember who they were and what happened before. Like everyone else in Canaan, Nadia the dyer's daughter writes in her book every day. But unlike everyone else, Nadia can remember. What she remembers is: some people have used the Forgetting in order to perpetrate lies. And so she's got somewhat of a secret life: sneaking out beyond Canaan's walls to explore and see what lies beyond. She knows she can't necessarily trust what they've always been told about their world, so she wants to see it for herself. One day, she gets caught by Gray, the glassblower's son, and from then on, they are both caught up in a web of secrets that becomes more and more entangled the deeper they delve…

Observations: Like other "we just live in this small, confined world and nobody questions it, ever" stories—Andre Norton's Outside, the Divergent series, Margaret Peterson Haddix's Running Out of Time—it is fairly apparent early on that Canaan was created with a purpose. That isn't really a spoiler. It's the who, why, and where that are the mystery here, and the more clues Nadia uncovers, the more interesting it gets. I won't give too much away here except to say that it's an intriguing bit of speculative fiction and definitely action-packed.

The suspense is helped along by the premise—the fact that, every 12 years, everyone forgets everything, and at the point where we join the story, the Forgetting is coming, and soon. Nadia, as the only one who has any memories (however vague) of the previous Forgetting, is an easy character to immediately identify with in that respect. One side effect, though, of the fact that nobody really remembers anything but the past 12 years, is a bit of confusion on the part of the reader. For me, it took several chapters of moving in and out of that confusion, that memory loss, before I really felt like I had a handle on the mechanics of the story universe. Ultimately, I thought it was worth the slight muddling through I had to do in earlier part of the book—once I was past that, and Nadia's discoveries started to point the way to more and more intriguing revelations, I was much more engaged, and ultimately thought it had an effective and interesting ending.

Conclusion: Despite the comparison above to Divergent, this is not really a dystopian world; rather, it's a sci-fi adventure with interesting philosophical implications and a very good "what-if" premise at its heart: what if, every 12 years, we forgot everything and were no longer accountable for who we are or what we did?

I received my copy of this book courtesy of my library's ebook collection. You can find THE FORGETTING by Sharon Cameron at an online e-tailer, or at a real life, independent bookstore near you!
Posted by Sarah Stevenson at 10:24 AM
Labels: AF, Fantasy/Sci-Fi, Reviews, Sisters, Suspense

Ooooooh.
WOW. I would totally get tattoos of who my family was, in this case. On the other hand, if they pissed me off, I might delete a couple names...

There's definitely some conflict about deletions in this story. I liked it, even with the confusing bits.

This sounds fantastic! Sounds like some of the thought provoking SF I loved growing up. By the way, "All Summer in a Day" traumatized me as a child, too. It's permanently imprinted on my psyche.

It's terrifying! I'm glad to hear I'm not the only one. Ray Bradbury often terrifies me, but usually in a good way...